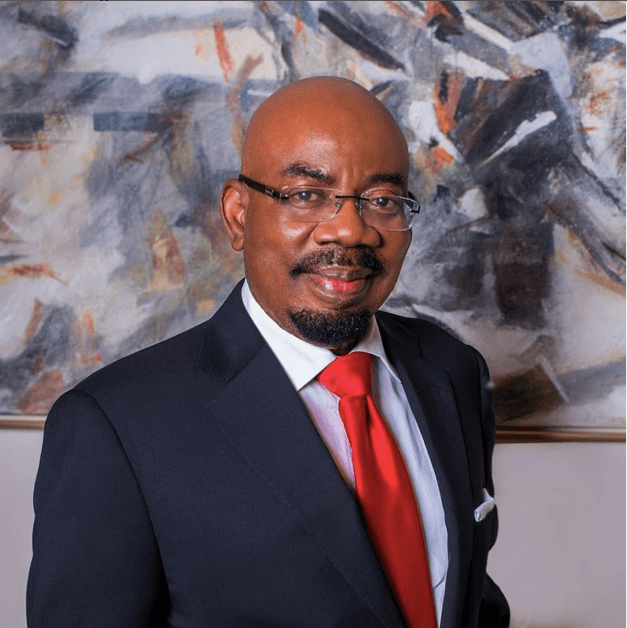 Jim Ovia Biography, Age, Wife, Children, Net worth, Source of Wealth, and Controversy can be accessed below.

Jim Ovia is the second son in the family of Obi Olihe of Agbor-Obi. His father was one of the most revered chiefs in Agbor Kingdom, Delta State.

Jim James Ovia (born November 4, 1951) is a Nigerian businessman, a native of Agbor in Delta State. He founded Zenith Bank in 1990.

He had his primary education in Delta State, after which he enrolled at the prestigious  Ika Grammar School, Bojiboji-Owa for his secondary education.

Jim Ovia Marriag: Kay Ovia, she is  the MD/CEO at Quantum Markets Ltd.

Jim Ovia, dubbed the “Godfather of Banking” by Forbes Africa, earned this title by building Nigeria’s largest bank.  Ranked 325th in the world (The Banker, Top 1000 World Banks, 2016), Zenith Bank has over $16bn in assets today across over 300 branches in Nigeria, with a strategic international presence in the UK, Dubai, China, Ghana, Sierra Leone and the Gambia.  He had always instilled a high level of corporate governance across the Bank; enabling it to achieve a $850m GDR listing on the London Stock Exchange in 2013.  In 2017, the Bank issued a $500m Eurobond that was four times oversubscribed and priced better than the equivalent home country sovereign bond.

OTHER NEWS:  Selena Lee is engaged to her boyfriend, actress reveals engagement news on Instagram!

Jim Ovia is among the first ten richest bankers in Nigeria. He is the founder and Zenith Bank and also the largest individual shareholder of the bank. He has assets worth billions of Naira in different parts of the country, including Lagos Marriott Hotel, the Aquamarine Boat Club, and the Civic Towers which has over a 15-storeys.

According to Forbes, Jim Ovia has an estimated net worth of $550 million. As the Chairman of Prudential Zenith Life Assurance Limited, he oversaw the landmark partnership of Prudential UK; one of the world’s largest life assurance companies and Zenith Life – Nigeria’s fastest growing life assurance company.  He is currently the Chairman and majority shareholder of Zenith General Insurance Limited; Nigeria’s most profitable general insurance company.  An avid fan of iconic architecture, he developed the Civic Centre and Aquamarine Boat Club to exploit Nigeria’s burgeoning hospitality sector.  Adjacent to this, he built the Civic Towers, a 15 story office block that colloquially is referred to as Nigeria’s “Empire State Building”.  Driven by the role that technology could play in Nigeria; he established Cyberspace Limited to provide internet services and Visafone Communications Limited to provide telecom services.  The latter was sold to MTN, Africa’s largest telco, for an undisclosed sum in 2015.

Jim Ovia’s contribution to the Nigerian economy has been recognized by successive governments; he was conferred with the national awards of Member Federal Republic (MFR, 2000) and Commander of the Order of Niger (CON, 2011).  He is an alumnus of Harvard Business School (OPM), University of Louisiana (MBA) and Southern University, Louisiana (B.Sc).

The Governor of the Central Bank of Nigeria, Godwin Emefiele, and the Chairman of Zenith Bank Plc, Jim Ovia, have descended into a major tax avoidance scandal in Europe following revelations that they most likely skipped the payment of about £11million value added tax while importing luxury jets into the European Union.

The two men are among a number of personalities around the world believed to have used artificial leasing schemes to avoid VAT on jets imported into the EU, PREMIUM TIMES had reported.

The revelations came to the fore as more than 380 journalists from 96 media organisations in 67 countries scrutinized leaked data obtained by German newspaper, Suddeutsche Zeitung, and the International Consortium of International Journalists (ICIJ) from two offshore secrecy providers (Appleby and Asiaciti Trust) and 19 secrecy jurisdictions around the world.

The leaked 1.4 terabyte data, now dubbed Paradise Papers, contains 13.4 million records and is no doubt one of the biggest leaks in history.