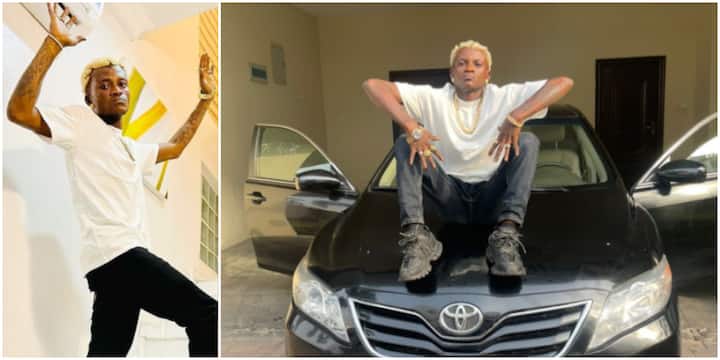 The young man has reportedly become the proud new owner of a Toyota car. This is coming just a few days after he became a viral sensation on social media.

The great news was shared by Portable himself on his Instagram page. The music star posted a photo of himself sitting and posing on his new vehicle.

Portable didn’t just stop at posting a photo of his new ride, the Zazu crooner also gave a shoutout to his benefactors as he expressed his heartfelt gratitude.

According to the Zazu star, he had nothing but big love and appreciation for Olamide, Poco Lee and Kogbagidi for showing him the world.

Portable also alerted fans that he will be shutting down shows with his new whip.

“Awon fans ti boo cardi o . Big love and appreciation to my benefactors @olamide @poco_lee , @kogbagidi to showing me to the world . New whip for the road. Coming to shut down all shows Zaaazoooo!”

Music executive, Jude Okoye, has reacted after his wife, Ifeoma, disclosed that she is done with child bearing.