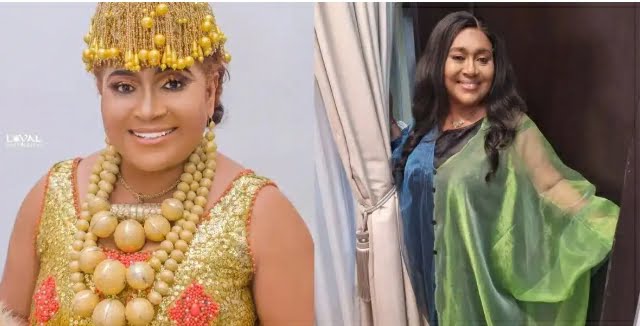 WOTHAPPEN Reports That Nollywood actress Hilda Dokubo has revealed her reaction, anytime anyone questioned her political ambition or questioned celebrities who delve into politics.

The veteran stated via her Instagram page, that she always laugh when she hears people say “Nollywood isn’t politics”.

The veteran noted how people always assume that one will remain where they last saw them.

“I laugh eveytime somebody says Politics is not Nollywood o, Hilda leave politics and face acting. I laugh because it’s not too different from leave acting and go study law. People will always assume that you will remain where they last saw you, that was why on the 3rd day the women returned to the tomb to seek Jesus, even when he ore informed them that he will rise on the 3rd day. Getting ready for my next responsibility. Please go and collect your PVC. You need it to vote right”.

OTHER NEWS:  5 Most Influential Big Brother Naija 'BBNaija' Stars Of All Time

The veteran is set to join her colleagues running for elections.

It will be recalled that the likes of Funke Akindele, Tonto Dikeh, Caroline Danjuma, Banky W, Desmond Elliot, Rita Daniels and others have delved into politics.

Unveiling her poster, Hilda Dokubo announced that she wrote to apply as a member of the house of representatives, Asalga Akulga federal constituency.

“My dear people, I write to apply…. Yours OBIdiently”.

Hilda Dokubo had joined the leagues of celebrities with a doctorate degree.

Weeks after Helen Paul bagged a PHD degree, Hilda Dokubo had been conferred with a Doctorate degree in Literature.

OTHER NEWS:  BBNaija: These are 4 housemates up for Eviction Tonight (Photos)

Hilda Dokubo can now be addressed as a Doctor of Literature in Leadership and Human development.

The degree was to honor the actress for her selfless works in leadership and human development in the country.

The degree was awarded by the Institute Suprereur of Technologies Et De Management.

According to her, they can never know who is watching them.

“Keep doing what you are doing, you never know who is watching. Well…this is more importance one in the bag. Have a blessed day people”.

“She’s always there for me” Kunle Afod eulogises wife, Desola as they step out in style (Video)