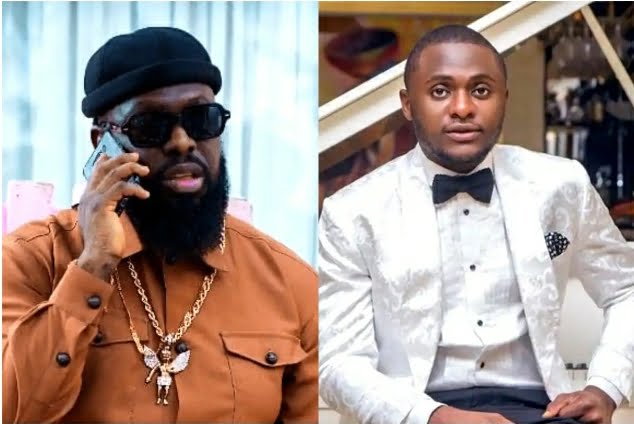 Ubi Franklin, a Nigerian music artist manager and TV program host, has retaliated against Timaya after the latter threatened to beat him up in a recent tweet.

In a recent tweet, Timaya described Ubi Franklin as the nanny of Davido’s son, Ifeanyi, and urged him to focus on his job, saying, “I’m asking him to focus on that and not ruin it because Davido is a good guy and if he does his job really well, he’ll make his life better just because he made a comment he didn’t like.”

Ubi Franklin, in retaliation, took to Twitter to respond to Timaya, revealing the reason behind Timaya’s rage.

Ubi allegedly chastised Timaya after he collided with a woman and drove away. That, according to Ubi Franklin, is why Timaya is upset with him.

“I know because when you watch Timaya play gangsta, you think he’ll beat me,” he added. No, Wahala, I’m going to look for that CCTV footage. See how he knelt to beg from my oga home. He apologized the next day, saying he was high and attacked me without provocation, so self-defense kicked in.

I wasn’t satisfied since there were too many Big Boys/men who knew he assaulted me unprovoked because he was drunk, and I did my part to fill in the gaps. I am not a violent person, but I will use violence if necessary.

“Timaya is such a spoiled brat. You’re enraged because I told you it was terrible to knock a woman down and abandon her to her fate. You came here today to talk trash? I am not the type of person who will witness something wrong and remain silent. You made a mistake by knocking the woman down and leaving her there. Period.”