Trump says Nancy Pelosi will be ‘overthrown’ after she gave him an F grade for COVID-19 response, then blasts Fox News for interviewing her

US President Donald Trump has asserted that US House Speaker Nancy Pelosi will be overthrown from her position as America’s number three leader soon, calling her an inherently dumb person after she appeared on Fox News to talk about Trump’s response to the Coronavirus pandemic.

According to Trump, Nancy Pelosi wasted all her time focusing on his impeachment, which was a failed attempt. He also blasted news network, Fox News, for granting Pelosi an interview.

Pelosi told Fox News Sunday during a virtual interview with host Chris Wallace, that she didn’t understand why people were protesting coronavirus lockdowns and stay-at-home orders;

‘We’re all impatient. We all want out. But what they’re doing is really unfortunate,’ she said of the protesters ‘I wouldn’t over exaggerate the protests,’

‘We’re way late on it.’ Pelosi said about Coronavirus testing. ‘And that is the failure,’ she told Wallace. ‘President gets an ‘F.’ A failure on the testing.’

Trump in reaction took to his Twitter to blast Pelosi; ‘Nervous Nancy is an inherently ‘dumb’ person. She wasted all of her time on the Impeachment Hoax,’ Trump tweeted.

‘She will be overthrown, either by inside or out, just like her last time as ‘Speaker’,’ he continued, adding an insult at his one-favorite news network: ‘Wallace & @FoxNews are on a bad path, watch!’ 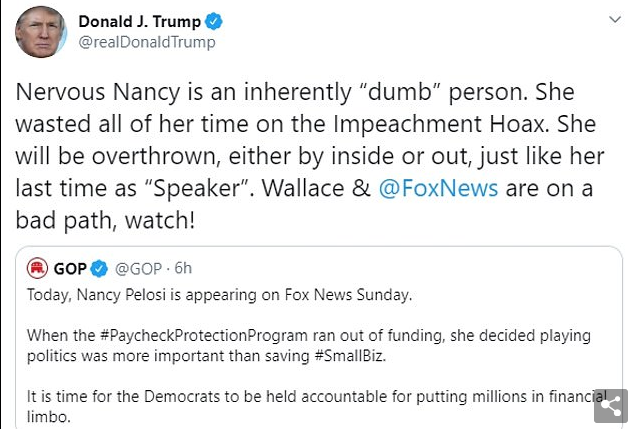 Trump last week blasted the US House Speaker after she released a ‘dear colleague’ letter  claiming Trump had lied to the American people about coronavirus, which made Trump call her a ‘weak and pathetic puppet’

‘I’m afraid that he’s going to act on the same basis of what he’s acted before: ‘it’s a hoax,’ ‘it’s magically going to disappear,” Pelosi said.

‘And that’s why I sent out the letter that I did after Easter, because Easter gave me time for reflection and prayerfulness about, ‘Ok, we don’t want to keep harping on what he did wrong.’ Plus he failed,’ she continued.

US Coronavirus death toll as at Monday is over 40,000.

Are Africans doing well in relation to COVID19? WHO releases list of countries with higher coronavirus cases

Are Africans doing well in relation to COVID19? WHO releases list of countries with higher coronavirus cases