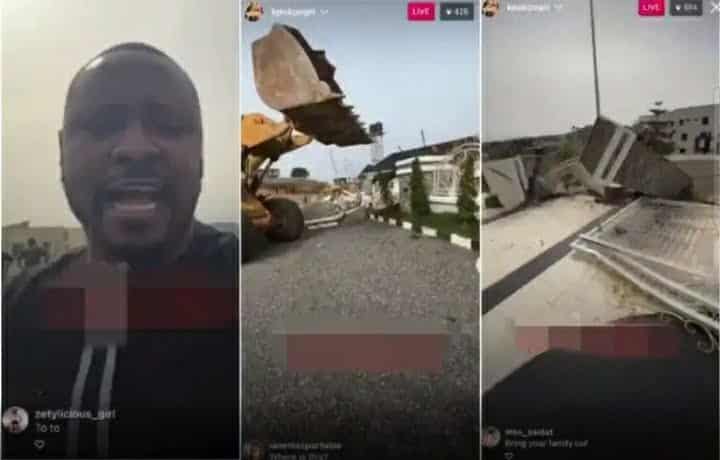 Actress Tonto Dikeh’s ex lover Kpokpogri has cried out in pain as he watched his property being demolished by FCDA(Federal Capital Development Authority), without a prior notice.

According to Kpokpogri, who said he does not know who is behind the demolition said FCDA stormed his building early in the morning without notice and began to destroy his gate and fence.

The embattled businessman said he does not know what he has done to warrant the demolition as he has all the legal documents for the property.

“I have children and visitors inside the house and these people just came and started demolishing without any reason”, he cried out.

Although the main building was not demolished in the video.

Wothappen recalls that Nollywood actress, Tonto Dikeh revealed why her relationship with ex, Prince Kpokpogri is way messier than her marriage to Churchill.

The actress made this known while carpeting a well known newspaper outlet for their false information about her and Kpokpogri.

Tonto Dikeh had taken to her Instagram page in the early hours of Sunday morning, April 10 to plead with her fans to help her tag NDLEA for her to take a drug test so she could embark on a ‘Say No to Drugs Campaign’.

The actress stated clearly that she doesn’t need funds for the campaign but comprehensive drug test carried out on her through their office to enable her assist them in eradicating the pandemic called drugs.

The newspaper outlet in the cause of publishing, had twisted her post and had claimed that the actress wanted to do the test to prove her ex, Kpokpogri wrong.

Recall that Kpokpogri claimed that his relationship with the actress ended because of her addiction to smoking and drinking.

Correcting their false publication, Tonto Dikeh set the record straight that her relationship didn’t end because of his allegations against her but because he was exposed through series of voice note that he was promiscuous.

The actress affirmed that these weren’t allegations as she can confirm that it was his voice.

Tonto Dikeh stated that she was the one who left the relationship and not the other way round.

She added that the reason why their relationship became messy was because he wanted the actress to defend him and to stand with him to face his shame.

She wrote,”…. My relationship didn’t end because of allegations on me, MY RELATIONSHIP TO PRINCE KPOKPOGRI ended because he was exposed through series of voice note on how promiscuous he was sleeping with different women under one roof particularly Married women and this was exposed through his phone call to Miss Merit also one of the girls he was sleeping with and Ex Pimp!! These are not allegations as I can confirm that it’s his voice, I took my L and broke up this relationship and then the blackmailing by Prince started…. He never walked out of this relationship like he lied about, the only reason the end of us because dirty is simply because the man couldn’t believe I wouldn’t stand with him to face his shame… I would sincerely appreciate if you got your facts right Thanks”.