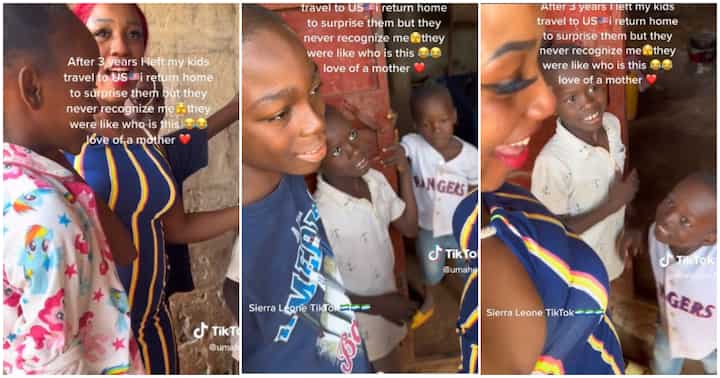 Mixed reactions have trailed the video she shared, as social media users hailed the mother-children reunion

A video of a mother who lived abroad reuniting with her children has stirred mixed reactions on social media.

In the TikTok clip, the woman showed up at the house and was received by her shocked children.

She had been residing in the United States for three years and didn’t tell them she was coming home. The woman said that her kids did not recognise her.

OTHER NEWS:  She's Such an Angel": Little Girl Meets Pregnant Woman at Beach, Admires Her Baby Bump in Sweet Video

In the clip, the younger kids stared at her as if trying to figure out who stood before them while the older kids hugged her.

“After 3 years I left my kids travelled to US I returned home to surprise them but they never recognise me. They were like who is this? Love of a mother,” she wrote in the caption.

“See me dea smile lek mumu but this feeling so good.”

“Wow wow they really take good care of your children.”

“Take your time change their life to your own you look sweet.”

“You say you travel to U S after 3yrs ,welcome back ma.”

“Wow, they are so happy to see you, the love of a mother is powerful.”

Mum cries as she reunites with her daughter after 2 years

Meanwhile, WOTHAPPEN previously reported that a woman had cried as she reunited with her little daughter after two years of separation.

OTHER NEWS:  Nigerian Lady Rents Shop for Mother of 3 Kids, Stocks It With Provisions & Freezer, She Breaks Down in Tears

The emotional mother identified as @fatumahbintaishah on TikTok lamented that her daughter couldn’t recognise her after they met each other. She cried in a viral video as her daughter kept a straight face and turned her eyes away.

“After two years without seeing me physically. I looked like a stranger to her.”

“This is Beautiful”: Video of Boy with a Sweet Voice Singing on Lagos Bus Goes Viral, Passengers Join Him

Lady Returns to Nigeria Empty after 15 Years in Dubai, Says She Hopes to Find a Good Husband, Video Trends