Social-Economic Rights and Accountability Project, SERAP, has urged the Independent National Electoral Commission, INEC, to take responsibility and end impunity for vote-buying and undue influence in Nigeria’s elections by promptly ensuring the arrest and prosecution of suspected perpetrators of these criminal acts. 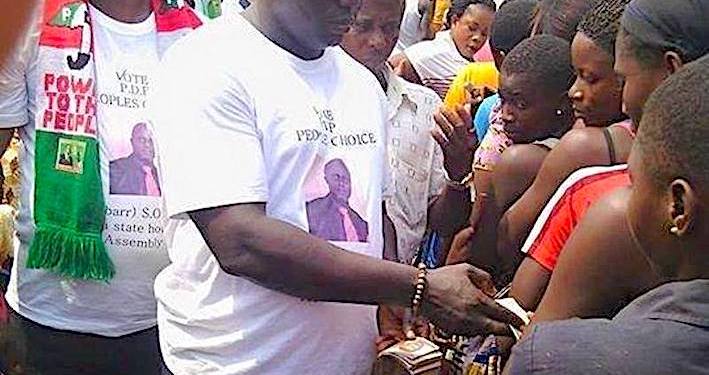 Wothappen reports that SERAP stated that the failure to prosecute parties and persons involved in the criminal act of vote-buying was responsible for the continuance of the electoral malpractice by parties.

SERAP said it was concerned with the continuous trend of vote-buying and the failure of INEC to discharge its constitutional duty by prosecuting those cut in the criminal act.

“The consistent practice and widespread serial reports of vote buying, electoral bribery and undue influence in elections suggest the failure of INEC to wake up to its constitutional and statutory responsibilities to prosecute suspected perpetrators and their sponsors.

“We’re concerned that the failure of INEC to rein in vote buying, electoral bribery, and intimidation is illustrated by the fact that the body has not seriously addressed similar incidents in previous elections.”

SERAP stated, “any failure to prosecute perpetrators of vote-buying, electoral bribery and undue influence during the Osun state governorship election would be entirely inconsistent with constitutional and international standards, and the Electoral Act.

“When political candidates and their sponsors decide to buy the support of the people rather than contest fairly for their votes, there are possibilities that such candidates will show a disregard for democratic rules and a disposition to adopt illegal means becomes inevitable,” SERAP said.

SERAP stated that “Sections 121 and 127 of the Electoral Act prohibit electoral bribery and undue influence before, during and after any election.

“Section 145(2) provides that, a prosecution under this Act shall be undertaken by legal officers of the Commission or any legal practitioner appointed by it.”

SERAP further called on INEC to immediately proceed with the prosecution of those arrested for vote-buying in the just concluded Osun state governorship election.

“We also urge INEC to ensure the prompt, thorough and effective investigation of the roles played by the leadership of APC and PDP in the reports of vote buying, electoral bribery and undue influence, identify those involved, and ensure that they are brought to justice.”

“Who Will Console the Consoler?” Empress Njamah Finally Reacts to Ada Ameh’s Death With Heartbreaking Post

Peter Obi Was The Sponsor Of ENDSARS – Lai Mohammed

Peter Obi Was The Sponsor Of ENDSARS - Lai Mohammed

Social media was flooded with new photos of Chioma wearing a revealing nightgown inside Davido’s home, with the caption, “Second Baby Calling.”

“I am Willing to Marry Him”: Beautiful 24-Year-Old Lady Declares Love for Once Homeless Actor Kenneth Aguba, Wants Him

Ebuka Looks So Humble During His Dairy Session – Ex-BBNaija Erica