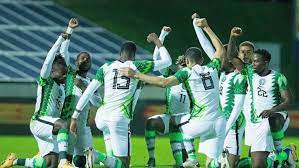 Following the fallout of the Super Eagles from the 2022 World Cup,the team are prepared to bounce back again with September friendly games

Wothappen reports that a top source revealed to Soccernet that efforts are being made to keep the Super Eagles fit during the period. He also added that inability of the African football body CAF to make it’s timetable public is seriously affecting the match schedules.

The source told Soccernet in a report that they had worked to organise four friendly matches for the Super Eagles in June until CAF decided to play two AFCON qualifiers during the period.

He said that the absence of a clear calendar makes planning difficult and the Nigerian national team may not be playing any games, at least for now, until CAF declares it’s a free window for the various national teams.

Recall that Nigeria faced Sierra Leone and São Tomé and Principé in June, days after the Nigerians had lost in straight friendly matches in the US to Mexico and Ecuador.