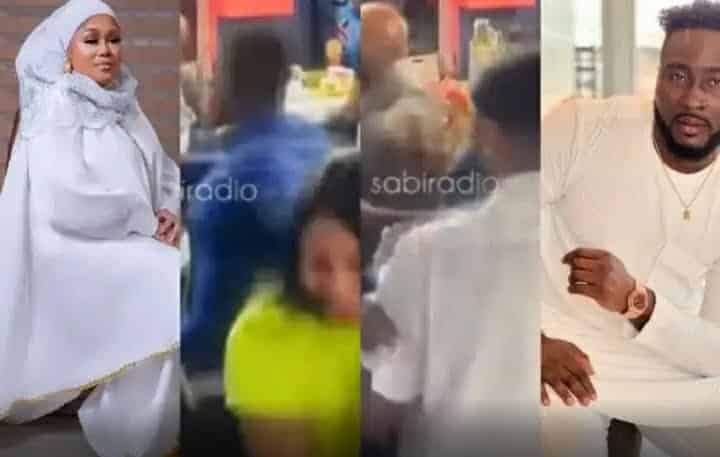 WOTHAPPEN reported that Level One housemates were thrown into chaos on Tuesday night as Sheggz and Adekunle exchanged words.

The problem is perceived to have started during last Sunday’s eviction show when the show host, Ebuka Obi-Uchendu, asked for Adekunle’s opinion about Sheggz and Bella’s relationship.

The housemate calmly answered Obi-Uchedu, saying he believed the relationship might be a mere strategy.

These words didn’t sit well with Sheggz, who quickly confronted him soon after the live eviction show ended.

Sheggz, who still had Adekunle in mind, confronted him over food.

The two almost got into fisticuffs, seemingly over a little food.

Things escalated quickly, with Sheggz doing most of the name calling and accusing Adekunle of playing the victim in the argument sparked by the latter tagging him “not intellectual.”

Amid their heated exchange, Sheggz’s sweetheart Bella almost got in a fight with Diana and Doyin in defence of her man.

Prior to their row, the housemates have hardly been on great terms. Sheggz had shared his reservation for the former Head of House several times, especially regarding his perceived notion that the latter could not be trusted.

Reacting to it, Sindodo Tayo slammed Adekunle for always playing the victim role.

According to Sindodo, Adekunle enjoys playing the victim.

Sindodo made this known as she concurred with a fan who slammed the reality star.

The fan wrote, “Adekunle should rest!! He doesn’t like Sheggz and he’s been waiting for this opportunity…. Omo werey!!!

Pere Egbi, on the other hand, had a different opinion of the situation.

Drumming support for him, Pere Egbi stated that one couldn’t help but love him.

Wothappen news recalls things heated up in Big Brother Naija ‘Level Up’ Islander’s house as housemates got into a scuffle.

The male housemates clashed over their supposed love interest for the first time since the season began.

Ex-Head of House, Eloswag got into a heated argument with fellow housemates, Chomzy and Chi-Chi.

The two have constantly talked about Eloswag and Phyna’s intimate kissing during the Saturday night party.

Eloswag, irritated with the constant talks, warned them to stop discussing the subject matter.

Chomzy and Chi-Chi, unbothered with his feelings, lashed out at him.

Bella, in defence of her friends, waded into the issue and attacked Eloswag.

The issue escalated from there as Eloswag took offence.

Eloswag warned them to stay away from the matter, and Bella lashed out at him.

Sheggz jumped in, and rather than try to calm the situation; he took to his babe’s side.

He questioned why Eloswag would respond to Bella’s dares.

“How can a babe say come and beat me, and you as a guy will respond to it”.

He threatened to beat up Eloswag if he didn’t mind how he talked to his babe.

“Do not come near me, I will beat you and go home”.

Giddyfia weighed in and pitched a tent with Eloswag.

He stated that Eloswag should be allowed to express himself and shouldn’t be shut up.

“No one should shut Elosway up, if he says he did not like it, that should not be a problem”.

In the comment section, Nigerians expressed disappointment with Sheggz for letting his feelings for Bella to cloud him.