Rihanna’s billionaire ex-boyfriend, Hassan Jameel is allegedly reaching out to news sites to take down pictures of them

Rihanna’s billionaire ex-boyfriend, Hassan Jameel has been accused of reaching out to news sites to take down pictures of them together.

Though why they broke up is still yet to be revealed, Founder of Black Sports Online, Robert Littal said the billionaire businessman seems not to be taking the breakup which came after 3 years of dating, well.

Littal who admitted that he is not ready to pick a fight with the billionaire over photos with his ex-girlfriend, said it was more of a threat than a request.

Read his tweets below; 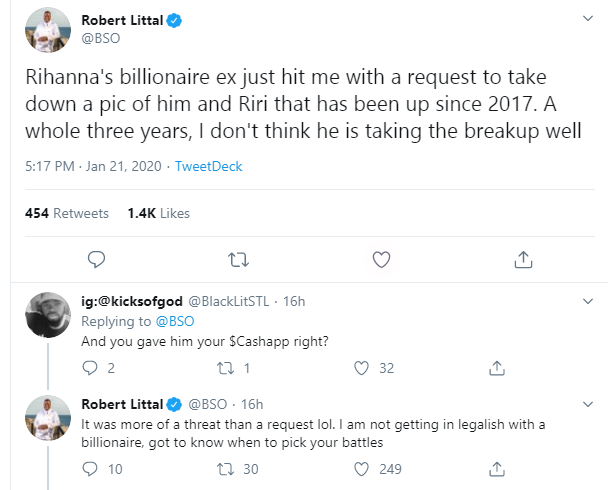 8 Reasons Why You Should Go for a CSPO Certification

She Has Courage: Beautiful Nigerian Lady Collects Man’s Number Inside Bank, Tells Him His Hand Is Soft

Woman Married to 2 Men Opens up on Her Marriage in Video, Says They all Sleep on the Same Bed

#BBNaija: Rachel Speaks On Her Relationship With Adekunle