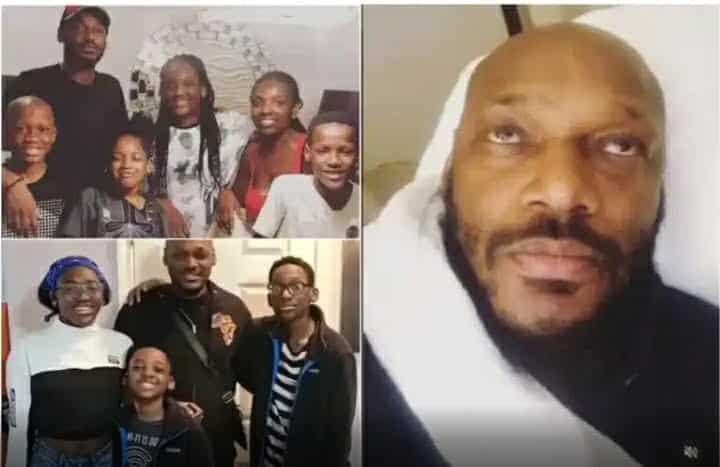 Award-winning legendary singer, Innocent Ujah Idibia popularly referred to as  or 2baba has stirred up reactions after he was seen praying for his all children.

The legendary singer, who recently broke down when he visited the grave of his late friend and singer, Sound Sultan, shared a video in which he begged for God’s protection on all his children. In the caption, Tuface reeled out all the names of his children and asked God to protect them all.

His teeming followers reacted. While some joined him in prayers, some could not help but notice his aging face.

One fan in particular, big_pluto_6, urged him to buy election form, “Baba don reveal him face with out editing… baba u for buy the election form. I go vote u baba for president of Nigeria 🇳🇬 e suit u ❤️

Wothappen news recalls 2baba paid a visit to the grave of his late friend and singer, Sound Sultan.

Sound Sultan left many heartbroken when he passed away on July 11, 2021.

He died after battling ‘Angioimmunoblastic T-cell Lymphoma,’ ‘Cancer of the throat.’

Before his death, Sound Sultan underwent chemotherapy in a hospital in the United States of America.

2baba shared a video of him visiting his grave in America, where he is bonding with his 3 kids who he shares with Pero Adeniyi.

Taking to his Instagram page, 2baba stated that he went to pay respect to his brother alongside Emma Ugolee, Frankie J and others.

He wrote, “Went to pay my respect to my brother Sound Sultan. With my brothers @emmaugolee @amfrankiej @blackahrank July 11 WORLD SULTAN DAY. Blessed. We miss u dear friend. Olanrewaju Fasasi bless up”.

This isn’t the first time, 2baba would be paying respect to his late friend since his death.