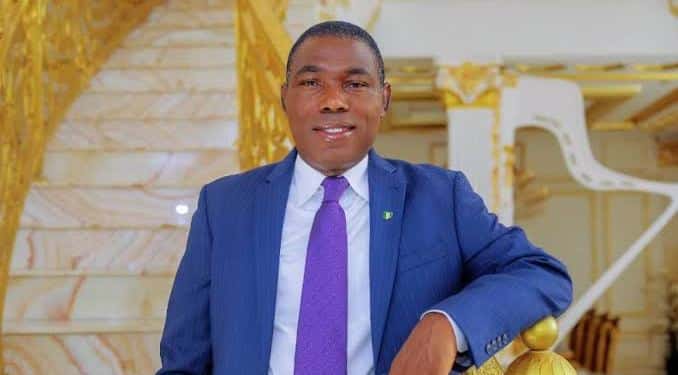 Prince Adewole Adebayo Biography, Education, Career, Legacy and Ambition can be accessed below.

Wothappen reports that Prince Adewole Adebayo is a dynamic world-class lawyer and the presidential flagbearer of the Social Democratic Party (SDP) for the 2023 general elections in Nigeria.

After completing his Primary education in Ondo State, his love for knowledge made him press further to attend Saint Joseph College, Ondo State, Nigeria. He gained admission to the prestigious Obafemi Awolowo University (OAU) where he graduated with honours in Law.

While in O.A.U., Prince Adewole Adebayo did not only run a successful law programme, but also participated in national activism as a Nigerian student.

He was called to the Nigerian Bar in the year 2000 after completing and passing his bar exams from the Nigerian Law School, Lagos.

In 2002, shortly after his return to Lagos following his NYSC in Kogi State, he joined the Tunji Abayomi law firm where he quickly rose through the ranks. Prince Adebayo later acquired Masters in Law at the University of Jos, Plateau State, Nigeria.

Adewole Adebayo began his legal career as a litigation lawyer at Tunji Abayomi and Co. in Lagos State, Nigeria. After practicing for two years, he founded his own law firm, “Adewole Adebayo & Co., House of Law”, in 2002.

One of the spectacular cases handled by his firm was the case between Femi Falana and the Federal Government, in which Femi Falana (SAN) contested the constitutionality of the contract between the Ministry of Interior, the Nigeria Immigration Service, and Continental Transfert Technique Limited for the collection of Combined Expatriate and Residence Permit Aliens Card (CERPAC) fees. Prince Adebayo represented Continental Transfert Technique Limited in the case. With seasoned lawyers as associates and partners, he has groomed many seasoned lawyers one of which is Dr. Kayode Ajulo, former National Secretary of the Labour Party.

He participated in the activities of Nigerian Labour Congress as a Comrade and he made friends across Nigeria who admire him for his strength of character, integrity and zeal.

His track record of successes during the Obasanjo’s administration eventually brought him to international limelight as many international businesses and conglomerates began to entrust him with the legal fate of their firms.

Today, Prince Adebayo is a member of the International Bar Association. His legal practice cuts across all the continents of the world. He is licensed in California, New York and courts of the United States.

He has substantial law practice experience in UK, Europe, Australia. He is a Fellow, Chartered Institute of Arbitration Nigeria, Singapore and United Kingdom.

Prince Adebayo Adewole is also President and Board Chairman of several corporations in the US, Nigeria and East Africa.

Prince Adewole Adebayo is a selfless, patriotic passionate son of the soil. In 2016 he decided to relocate his businesses to his hometown of Ondo City in order to contribute to the development and growth of the town and the state as a whole. In December that year, Prince Adebayo held a one-week retreat at his country home in Ondo kingdom. It was at this retreat that the objectives and mission statement of KAFTAN TV was birthed. Today, KAFTAN TV is headquartered in Ondo with additional offices in Lagos, Abuja and Washington DC in the United States of America.

OTHER NEWS:  Has Linda Rodriguez Had A Stroke? Sun Sea And Selling Houses 2022 Cast

KAFTAN TV has produced 1,022 corps members in its three stations in Ondo, Abuja and Lagos.

The company has successfully retained 103 corps members. Prince Adebayo extended the training given to corps members to the Ondo Youth in February 2021, after realising that most indigenes were not benefiting from the TV training.

It therefore came as no surprise when in November 18, 2021, National Youth Service Corps (NYSC) recognised KAFTAN TV as the Best Corps Employers in Ondo zone.

Adebayo now sponsors over 500 young Ondo students in Nigerian tertiary institutions, in addition to numerous students from other towns and states.

More so, he has financially empowered hundreds of women in Ondo Kingdom. He does this without making a fuss about it.

In light of all this, Prince Adewole Adebayo is a recipient of many awards in recognition of his service to his State, community and to humanity.

Prince Adewole Adebayo has emerged as the Social Democratic Party candidate for the 2023 presidential election in Nigeria.

After scoring 1,526 votes at the party’s National Convention in Abuja, he emerged as the party’s standard bearer, defeating the only co-contestant, Ms. Khadija Lamidi, who polled 83 votes.

In his acceptance speech, 54-year-old Adebayo, said that his emergence indicates it was the turn of the Nigerian masses to take over power in 2023; adding that the dividends od democracy would be enjoyed by all.

Adebayo pledged that the SDP would give the ruling party All Progressives Congress and the People’s Democratic Party a ‘good fight’ in the 2023 general elections.

He urged Nigerians to join the SDP, register with INEC to vote, open their minds, tell others about SDP and vote out bad leaders in 2023.