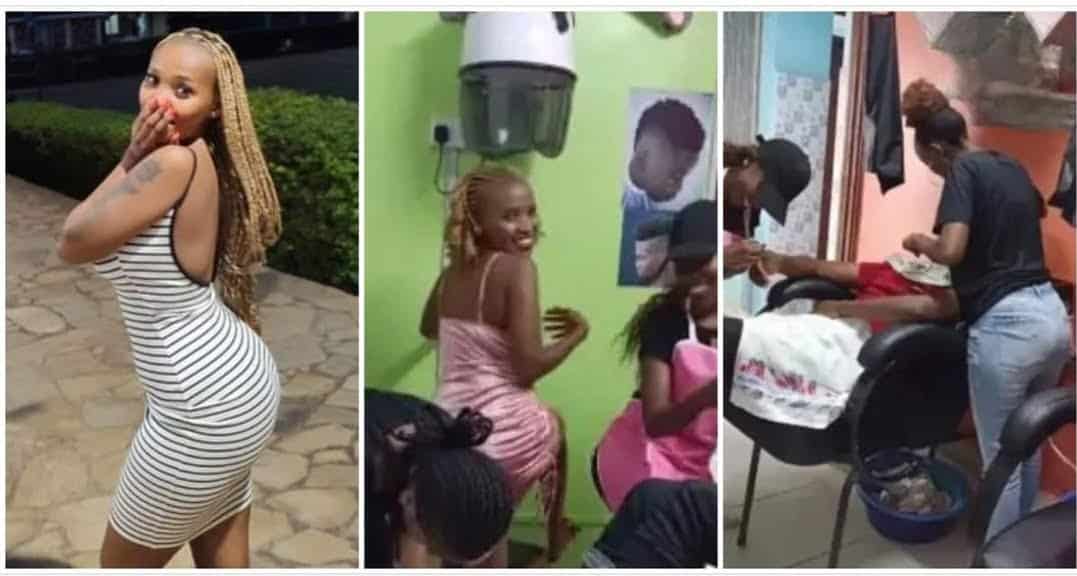 Viral Nairobi female barber identified as Mwende Frey has opened up about her business and the challenges she faces running an all-female shop that strictly caters to men...

In an interview on Radio Maisha, the mother of one said she prefers dealing with older men in her premises because they have more spending power…

The gorgeous barber also said that her shaving shop is strictly for men and that women accompanying them are not allowed.

“If you are a man, leave your wife, sister, cousin or side-chic in the parking. We do not like drama and most women will have issues when they see their men being touched when given the services offered inside the shop,” she said. When asked what exactly she offers that warrants such rules, she said: “We shave everything from the head, chest and down there.

We also offer massage services and when the man is being shaved, there is a lady twerking and entertaining him.“

Mwende revealed an experience where a woman came to the barbershop and wreaked havoc because she wanted to know if her hubby was in there.

“She asked us if we have ever seen anyone like that and we said no, we have never seen anyone who looks like that, but we lied. Her husband was inside, and we did not tell her the truth because the guy had already paid for the services,” she further said.

Mwende also said she is planning on opening a similar shop in town to cater for the people who cannot make it to Eastern bypass.

MORE:  During her festival appearance, Sophia Urista reveals her privates part and urinates on the face of a male fan live on stage (Video)

Female barber cuts man’s hair with clipper in her backside

Meanwhile, Wothappen.com previously reported that a video of a female barber cutting a man’s hair with the clipper in her backside had stirred reactions on social media.

In a short video shared by Krakstv on Instagram, the lady is seen positioned on two stools that places her backside at the same level as the customer’s head.

She then makes to style the man’s hair with the clipper tucked in her backside while she backs him.

She is supported by another male barber at the other end who cuts the man’s hair the normal way.

Pretty Lady who Runs a Barbershop Where Ladies Twerk for Customers Says They not Only Shave Men’s Heads.

Mercy Chinwo bea,ms with joy as she holds wedding introduction (Photos and Video)