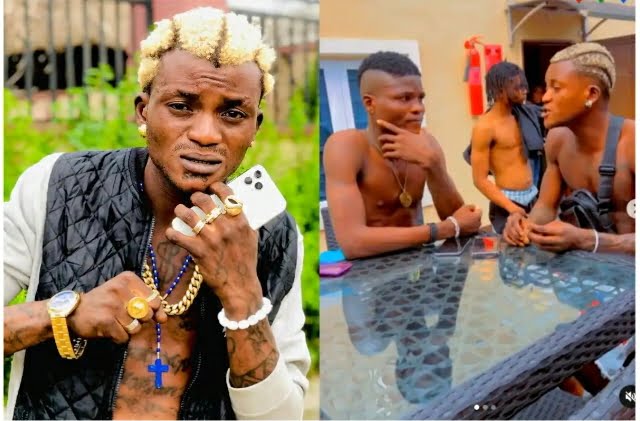 Sensational Portable, a Nigerian singer and Zazu crooner, has finally apprehended the person who tried to impersonate him a few days ago.

Sensational Portable, a Nigerian singer and Zazu crooner, has finally apprehended the person who tried to impersonate him a few days ago.

On Valentine’s Day, the guy who impersonated famous artist Portable was seen with his crew at the mall proposing to a random female, with a crowd gathered to witness the incident.

The video went viral and drew a lot of attention. The Zazu crooner appears to be annoyed by the impersonation and has apprehended the individual who used his name to trend.

He was heard wondering why the guy has been going about mimicking him and even went the extra mile of flaunting his characteristic hairdo in a video spotted on the page of Portble.

The Zazu hitmaker then threatened the guy, stating that he would first injure himself before dealing with him properly. He also demanded that the impostor hand over the footage that he has been exploiting to deceive others.

In one video, the fake Portable apologized to the artist for stealing his identity, while in another, the false Portable was seen with half-shaved hair that was dyed back to black.

Zubby Michael Shows Up at E-money’s House With Bag of Money, Rains Bundles on Billionaire Ahead of Party

Crazaclown, a stand-up comedian, explains why he “arrested” and “detained” his daughter (Video)