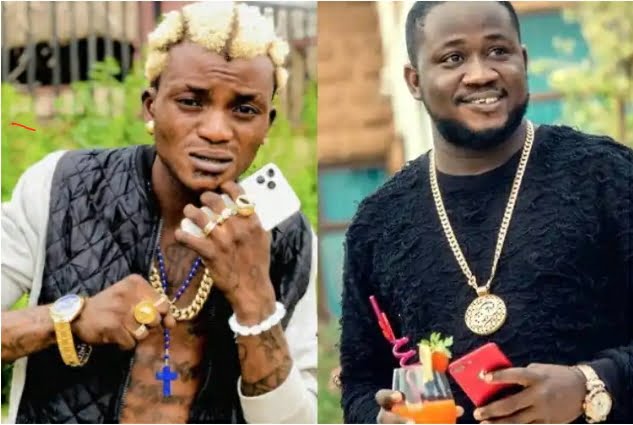 Sensational Portable, a Nigerian singer, has accused his promoter, Kogbagidi, of using him for personal gain.

Portable ran into Kogbagidi and produced a commotion in public as he demanded his car, according to a video shared by Instablog9ja.

The fast-rising musician can be seen in the video carrying a large stick as he demands his car after alleging that Kogbagidi cheated him out of his money, possibly by exploiting him to put on a show and pocketing all the revenues instead of giving him what he due.

It’s only been two weeks after Portable accused dancer Poco Lee of stealing money from him after a performance.

Below are some of the responses to the video.

mrpresidennt: “This youngster is in desperate need of assistance.” He’s still trying to figure out how to deal with the sudden stardom he didn’t expect.”

5gcarpet: “The person who said this guy needs to go to rehab is not lying so even then, we need to take him to traditional rehab in Osun.”

“They say we shouldn’t believe everything we see on social media,” legelelogistics says. Jim Iyke and Uche are two names that come to mind. What if this is also staged?”

“This folks can do anything for PR,” cityofurhobo says, “and I don’t see the hype in this portable man.” Zinolessky”

“This man should know @kogbagidi is only a destiny assistant, he should be aware of the way he speaks to him, it’s natural,” officialsekemi says.

Davido Makes Cryptic Statement On Instagram: “I Fear No Evil”

Dorcas Shola Fapson’s Range Rover was stolen, but thanks to social media, she was able to track it down.