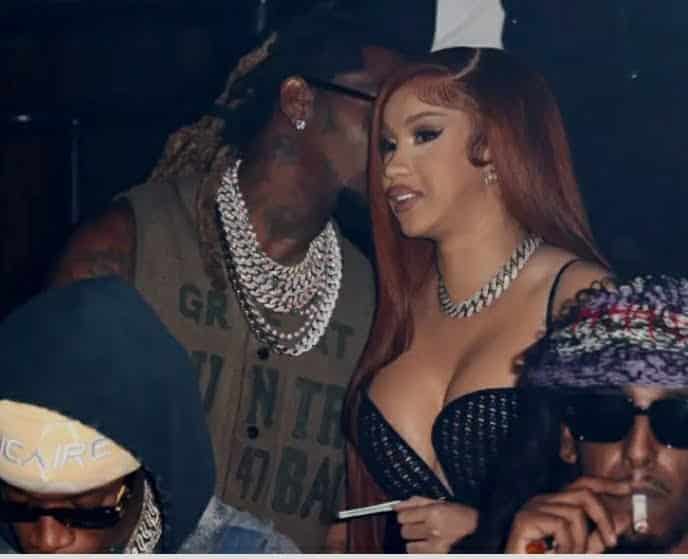 Cardi B posted a video of herself puffing away at three cigarettes when the US elections rolled out in 2020, but some of her fans are still surprised to see her smoking in one of her latest pictures.

The WAP singer stepped out on Friday, clad in a curve-defining outfit to show support to her husband Offset at his performance in a Miami superclub.

In a picture of herself with Offset that she tweeted a few hours ago, she’s seen holding a lit cigarette and fans just have one suggestion for the star – “stop smoking”

The singer looked absolutely stunning in a fishnet body stocking, while Offset donned a pair of peach-colored trousers with a khaki green cardigan.

Even though the cigarette in Cardi’s hand caught a lot of attention, one couldn’t take their eyes off her extreme nail extensions.

Pictures shared by the Daily Mail show Offset throwing dollar bills at the crowd from a stack of cash that he was holding while performing on the stage. He also had a cigarette in his mouth.

A few fans are taken aback by the fact that Cardi smokes and have urged her to “stop”.

One fan tweeted: “Cardi, why are you smoking cigarettes mama?”

Being a huge fan of the Netflix show, The Crown, Cardi recently shared in a tweet that she would have loved to have had “cigarettes and biscuits” with the late Princess Margaret.

The Houston Police department announced on Friday that they had arrested and charged a suspect in Takeoff’s death.

In the video shared on the department’s official Twitter page, Mayor Sylvester Turner said Takeoff was innocent, before adding: “I’m glad that a suspect has been arrested and charged for Takeoff’s death.”

“It will bring some comfort to the family, though it does not bring Takeoff back. This is a significant step in seeking justice and I hope it also brings additional comfort to all those who loved Takeoff.”