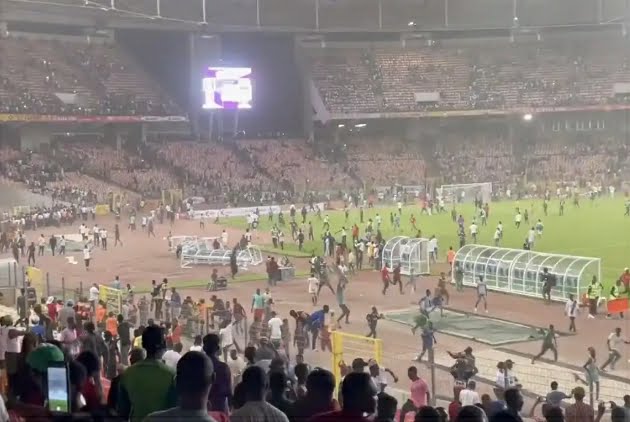 The Nigeria Football Federation (NFF) has denied claims that a disruption occurred after a FIFA World Cup playoff match between Nigeria and Ghana on Tuesday at the Moshood Abiola National Stadium in Abuja.

Following the match between the Super Eagles of Nigeria and the Black Stars of Ghana, Nigerian fans invaded the pitch at the Abuja Stadium, destroying stadium facilities.

FIFA had banned the Moshood Abiola National Stadium in Abuja owing to crowd violence, and the match’s Video Assistant Referee (VAR) equipment had been stolen as a ploy, according to the statement.

The statement was as follows:

“We are concerned about the recent influx of false stories, sometimes known as fake news, primarily on social media.

“The allegations that the Moshood Abiola National Stadium in Abuja has been banned by FIFA for an indefinite period of time are false.

“It’s the result of some people’s vivid imaginations. FIFA and CAF have not communicated with the NFF in this manner.

“There was also a bizarre claim that the match’s Video Assistant Referee (VAR) equipment had been taken.

“At first, we assumed it was an April Fool’s joke, but it’s concerning that certain news organizations are taking it seriously.”

“Nothing of the such occurred. Sebastian Runge, FIFA’s Head of Technology, has returned the VAR equipment to the FIFA office in Zurich, Switzerland, in good condition.

“The NFF recognizes that Nigerians in general were saddened by the outcome of the match, which prevented the Super Eagles from qualifying for the World Cup.

“Everyone, including ourselves at the Federation, is in a difficult situation.”

“However, we are pleading with you to discourage the use of half-truths and blatant lies.” We believe that the current Super Eagles club is still capable of great things.”

‘Me vs. The Industry,’ Davido says in a cryptic post, implying that the Nigerian music industry isn’t behind him.