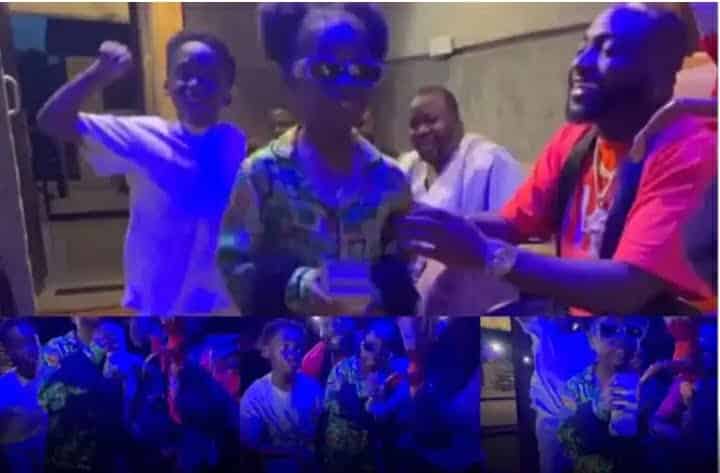 Imade Adeleke, the first child of award-winning singer, Davido, is undoubtedly a vibe.

The seven-year-old toddler stole the hearts of many as she hit the studio with her best friend, Jamil Balogun, the only child of Tiwa Savage.

While Jamil was sitting on one of the crew’s laps, Imade Adeleke entered the studio like the diva she is and turned up the atmosphere.

Imade and Jamil were seen vibing to Davido’s latest song.

The toddlers were pure vibes as they got everyone laughing and in a party mood.

The video has caught the attention of many Nigerians as they gushed over them in the comment section.

iamdhubem: It’s Jamil for me. I love to see good friendships

Ify_eve: It’s Jamil energy for me bestie like no other

spicyesse44: Imade is a born star

damnath_collections: Imade with the swag

abagbodi: I love the way he loves his kids, damnnm

ms_jfn: Too cute, is Imade vibing for me

okm_herbal: Jamil with the energy

pweettyinpearl: It’s bestie hyping her for me

In similar news, Imade Adeleke had generated reactions after bursting a dance and scattering the dance floor at a party.

Imade had proved to many Nigerians that she is also an entertainer, just like her father.

In a video that surfaced online, Imade was dancing with reckless abandon while other foreign kids made way for her to take the stage.

However, the people who gathered around continued to hail the superstar’s daughter for taking off other kids out off the stage.

Reacting to the video which made rounds, Nigerians were amazed at how Davido’s daughter took after her father, judging from her reckless dance and how she took over the entire space.

While others revealed that her moves are like that of former Big Brother Naija housemates, Liquorose.

In a video which went viral on social media, the six years old questioned her father on why he hadn’t sacked Isreal DMW yet.

Replying to her, Isreal DMW questioned what Imade expected him to eat if he should fire him.

Isreal noted how Davido is a good man.

“Your father is a good man, if he fires me wetin you want make I chop”.

Nigerians had a field day reacting to the video.

Many lambasted her for belittling Isreal DMW.