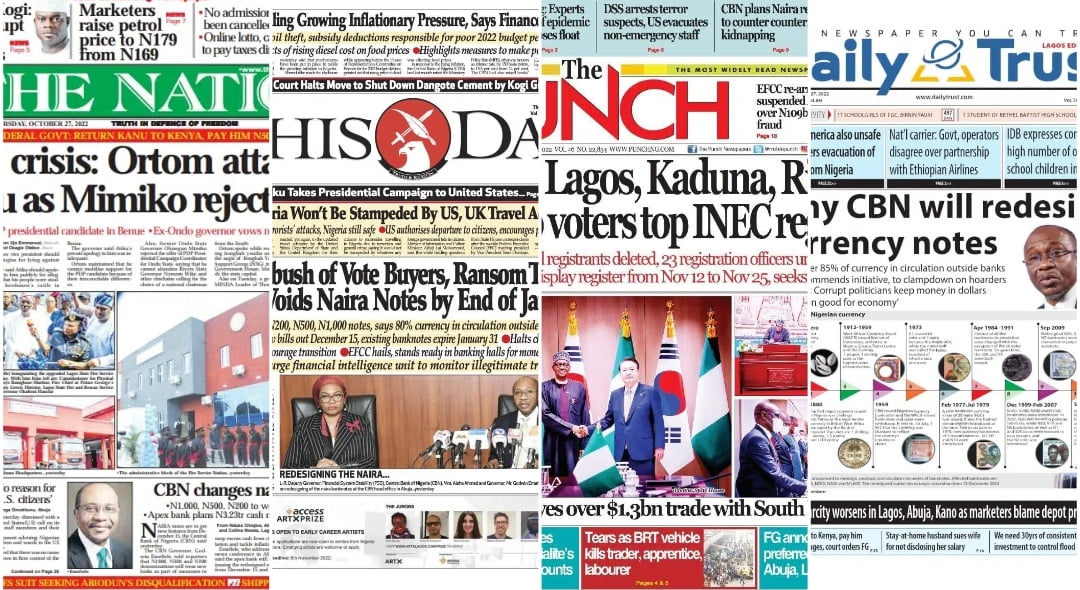 The PUNCH: The Chairman of the Independent National Electoral Commission, Prof. Mahmood Yakubu, on Wednesday, announced that the voter register had swollen up to 93.5m. Analysis of the preliminary register reveals that Lagos, Kano, Kaduna, Rivers, Katsina and Oyo states have the highest number of registered voters.

The Guardian: The Central Bank of Nigeria (CBN), yesterday, announced the introduction of newly redesigned N200, N500 and N1,000 banknotes, a move interpreted to mark the beginning of a broader currency census and the mop up of black money. At a virtual press briefing, CBN Governor, Godwin Emefiele, admitted the concern over large amounts of money outside the banking system, which is estimated at 80 per cent of the total money in circulation.

OTHER NEWS:  Dead bodies of people who died of Coronavirus can’t be claimed because they’re contagious — Lai Mohammed

This Day: In an apparent move to tackle vote-buying and control the amount of money in circulation, the Central Bank of Nigeria (CBN) yesterday announced a redesign of the currency in the variation of N200, N500 and N1,000. But beyond the reasons adduced are the far-reaching implications of the effects of the dramatic move that took the business community and the entire nation by surprise.

The Nation: A Federal High Court in Abuja has restrained the Kogi State government and its agents from further disrupting the operations of Dangote Cement Plc and its associated companies in the state. In a ruling yesterday, Justice Binta Nyako also restrained the state government and its agents from further shutting down, disrupting or suspending the activities of Dangote Coal Mines Limited and Dangote Industries Limited located in Ankpa and Olamaboro local government areas of the state.

Daily Trust: The scarcity of petrol is said to be worsening in Lagos, Abuja, Kano and across other states with marketers blaming an increase in the private depot price and a cut in supply at NNPC depots. This is just as the Nigerian Midstream and Downstream Petroleum Regulatory Authority (NMDPRA) has directed depot owners to increase the supply of petrol to retail stations