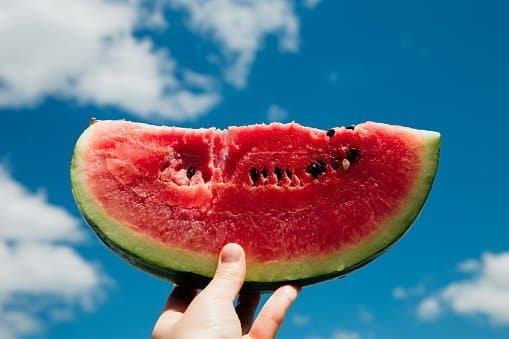 National watermelon day proves there really is a day for everything. But this delicious summer fruit has just the right as any to be celebrated!

The juicy fruit is loved by many and is famously endorsed by Harry Styles. Watermelon sugar was a huge summer 2019 bop and we were here for it!

The middle of summer is the perfect time to appreciate the fruit.

But why do we celebrate National Watermelon Day and where did it come from? Wothappen dives into the fruity special occasion.

When did National Watermelon Day start?

Slice of watermelon in hand over sky background

The big day is celebrated on August 3 each year and is an non-official American holiday.

The North Carolina Watermelon Festival will have it’s 37th annual celebration in Hertford County on Wednesday. The event lasts four days until August 6, 2022.

OTHER NEWS:  WHAT IS CHAT GPT’S PLAYGROUND AND HOW DO I USE IT?

History of watermelons for the national day

If you still aren’t sure why we have a National Watermelon Day, the history of the fruit might interest you.

The first watermelons appeared in South Africa 5,000 years ago, spreading to Egypt where they became an everyday food by 2000 BC. Watermelon is depicted in hieroglyphics on the walls of ancient buildings and were even laced in tombs of some kings. They were supposed to nourish them in the afterlife.

Watermelons reached India in the 7th century and Europe and China in the 10th. European colonists introduced the fruit to American in the 17th century.

Watermelons have developed overtime and have different outside and inside characteristics. Such as hybrid seedless watermelons and manufactured cube watermelons in Japan.

Watermelon has more lycopene than any over fruit or vegetable. Which is an antioxidant linked to decrease cancer and heart disease

The fruit is rich in citrulline, an amino acid which can help blood through your body and lower your blood pressure

Watermelon is an apt name

Watermelon is 92% water, which is what makes them so refreshing

You can eat the entire fruit!

Whilst many leave the watermelon rind and spit the seeds out, the entire fruit is edible and has lots of health benefits! In China, the rinds are stir-fried and dried for a light snack.

Watermelon is good for your skin

Watermelon is loaded with Vitamins A, B6 and C which help your skin stay soft and smooth.

How to celebrate national watermelon day:

The great thing about watermelons is they are enjoyed in many different ways, have you tried: