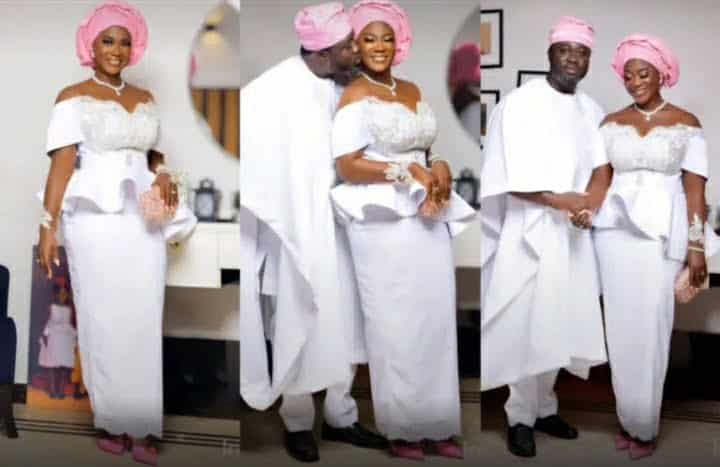 Nollywood actress Mercy Johnson Okojie is starting the new month with a profound message to her fans and followers about her alleged affair with a Nigerian clergyman.

Sharing a slideshow of beautiful family photos, Mercy Johnson sent a message to those questioning her absence on social media.

Captioning the photos, Mercy Johnson disclosed that Henry, their son was the page boy holding their rings.

Wothappen news reported that faceless blogger, Gistlover had alleged that the actress, alongside many of her female colleagues, had an affair with the clergyman.

In what seems to be a reaction to the news, Mercy Johnson shared a voice note on the power of silence.

Mercy indirectly stated that alot of people thinks she is unhappy because she is quiet, but in reality, she isn’t.

She is silent because she has learnt to appreciate silence in a world that keeps talking.

“A lot of people think I am unhappy because I am quiet. I am not unhappy, I just appreciate silence in a world that ever stops talking”.

Wothappen news recalls Mercy Johnson Okojie had shed some tears as she reminisced on her humble beginnings.

Mercy Johnson shared some experiences on her journey to fame in the Nollywood industry.

The actress, who has become one of Nollywood’s most sought after, recounted how she suffered hunger, thirst, shame and yet had to battle them all with a smile.

The role interpreter revealed that she told her kids that she was from the ghetto and had known to suffer.

For Mercy Johnson, anytime May 22 approaches, her heart stops skipping as she has many questions bordering on her.

The mum of four noted how she grew from grass to grace and made herself better each day for her kids.

She wrote, “I tell them all the time, I am a Ghetto child. I know hunger, I know thirst, I know shame yet I have always battled my storm in smiles…22nd May approaches and my heart doesn’t stop skipping with lots of questions on my mind. From nothing to here, all the suffer ehhh..hmmm this one of my favorites songs.. I wasn’t perfect at all but I chose to do better because of my kids. So no matter what comes, I don see 99 so 100 nor be anything….lol holiday has come and I am stuck with my team 24/7… Who wan rent children for wedding crowd abeg”.

The talented actress noted how many of them only follow her because they want to hear bad news about her.

Sharing a photo of herself on a movie set on Instagram, Mercy revealed that she just realised that many women are following her not because they like her.

According to her, they are waiting to hear bad news about her.

Cursing them, she prayed that they eat bad news all the days of their lives.