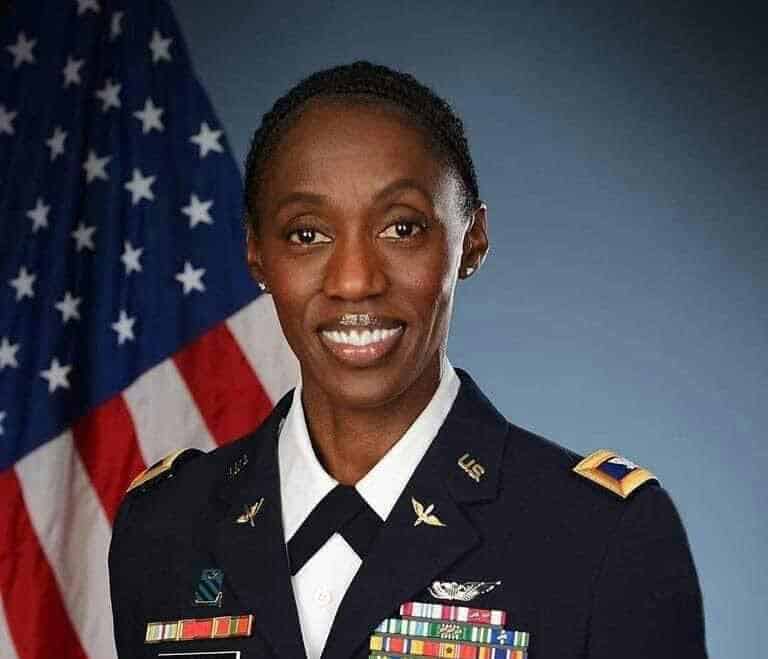 Of the 1.2m women and men of the US Army, only about 300 make it to the General Officer cadre, to which she has now been promoted.

Amanda is a proud Army officer whose dream of becoming a US Army general came true.

Amanda Azubuike, a woman of Nigerian heritage, has been promoted from Lieutenant Colonel to Brigadier General by the United States Army at Fort Knox, Kentucky, USA.

She graduated from the University of Central Arkansas with a bachelor’s degree in Communications in December 1993.

She joined the Army in 1994 and became an aviator after graduating from the Army Aviation Officer Basic Course.

In 1995, Azubuike graduated from flight school as a UH-1 pilot. She began her military career at Hunter Army Airfield in Georgia as a platoon leader with the 924th Aviation Support Battalion.

She was later transferred to serve as the Public Affairs Operations Officer at the Coalition Forces Land Component Command in Kuwait.

Following her promotion to Colonel, she was posted as the Public Relations Director of the Joint Force Headquarters/Military District of Washington at Fort McNair in Washington, D.C., where she headed the joint public affairs team that supported the 58th Presidential Inauguration.

Colonel Azubuike was the Chief of Media Relations and Public Affairs Operations Officer at the Headquarters of the United States Army Central Command in Fort McPherson, Georgia, after she graduated from the Army Command and General Staff College.

She played a vital role in Kuwait in support of Operation Iraqi Freedom.

Amanda bagged her Master of Professional Studies in Public Relations and Corporate Communications from Georgetown University.

She was assigned to the Community Outreach Division of the Office of the Chief of Public Affairs at the Pentagon. Following her participation at the United States Army War College, she was appointed the Public Affairs Director of the 3rd Infantry Division at Fort Stewart, Georgia, and deployed to Bagram, Afghanistan, with the Division Headquarters.

Colonel Azubuike became the Chief of Public Affairs for the United States Southern Command Headquarters in Doral, Florida. She later worked as the Chief of Staff and Senior Military Assistant to the Principal Deputy in the Pentagon’s Office of the Secretary of Defense.

The information in this article was curated from online sources. Wothappen or its editorial team cannot independently verify all details.

Advertise With Us: [email protected]

2023: God has not told if there will be election next year – Pastor Adeboye