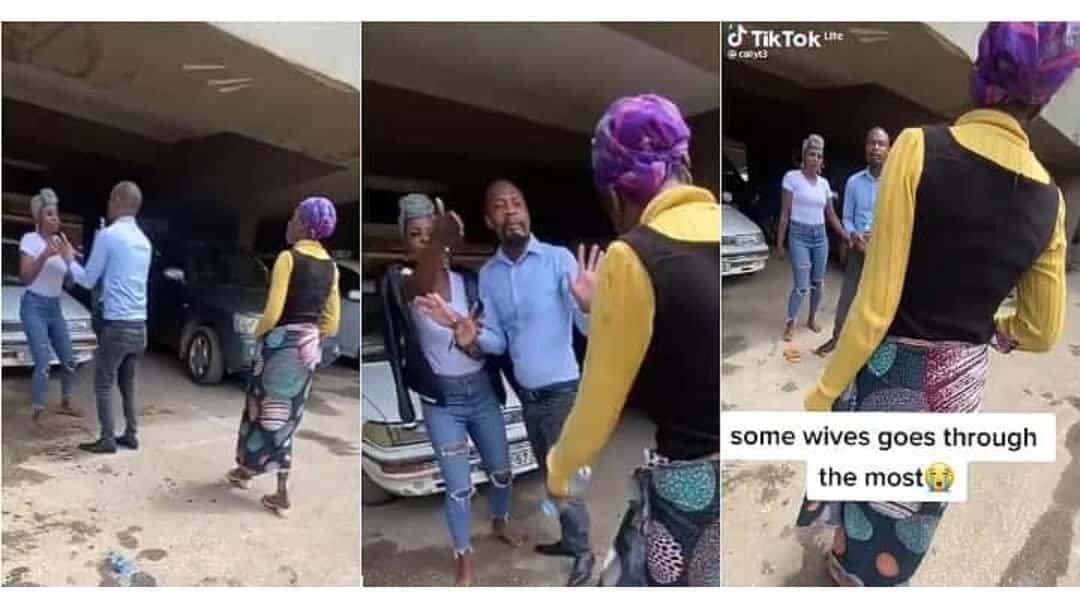 A video making the rounds online shows the heartbreaking moment a woman caught her husband with his side chick.

In the sad video, the lady confronted them, but her husband rather took sides with his side chick and asked her to leave.

The clip has gotten people emotional on social media as many shared their experiences with cheating partners.

A woman’s happy mood was totally ruined after bumping into her husband and his side chick.

In a heartbreaking video shared via TikTok, the woman confronted them to vent her anger and frustration.

Sadly, her husband outrightly took sides with his side chick and tried to protect her from any form of harm.

Reacting to this, his poor wife lamented bitterly in the video and expressed her shock over her husband’s attitude.

Bride Collapses as Husband Dumps Her on their Way Back from Church on Wedding Day, Video Stirs Emotions.

“It doesn’t matter how you dress you could be Beyoncé and your man will still cheat it’s not the wife’s fault it’s his fault.”
@zithunywazakithi stated:

“There is something you do not know people when a person go through hell and stressed by man you even forget who yiu are even to look after your self.”
@bingi32 reacted:

“That’s why u don’t agree with my mum Atti dress like a married woman. Abeg i go dress like ashawo til end.”
@mimiki182 wrote:

“Women please stop fighting against each other over a man who doesn’t respect both of you.”
@tabbie.thabi said:

“I hear you all but this guy is very much disrespectful. Look at how he picks that jacket and put it on her girlfriend infront of his wife.”
@annasich0 reacted:

“I Want to Go Home”: Nigerian Woman Abroad Says Her Husband Abandoned Her, Cries in Video to Be Deported