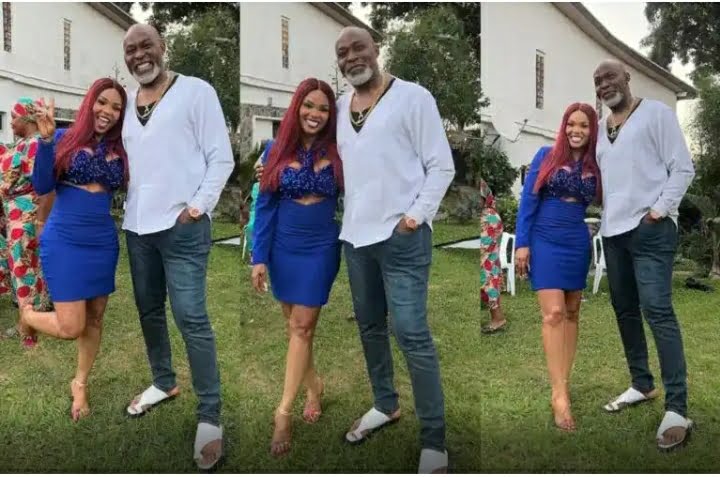 The single mother of two took to her Instagram page to express excitement at finally being on set with her idol.

Sharing photos of them, she urged her fans to stay in tune with their latest project.

“Finally get to be on set with the king himself @mofedamijo. Anticipate. Stay tuned guys”.

In similar news, Iyabo Ojo had shared a happy moment with veteran actress Genevieve Nnaji after they linked up at an event.

Unarguably, Genevieve Nnaji is one of the A-list Nollywood stars that many consider their role models, especially because of her private and scandal-free life.

In the post shared on her Instagram page, Iyabo Ojo expressed love for Genevieve Nnaji, saying she is her super-mega star of all times.

She captioned the photos: “I just love this woman, Genevieve Nnaji my super-mega star of all times”.

Wothappen news recalls Iyabo Ojo had reacted to reports of her affair with Apostle Suleman.

Wothappen news reported that Iyabo Ojo had been dragged into a celebrity scandal with a renowned clergyman, Apostle Johnson Suleiman.

Popular blogger, Gistlover dropped the names of some Nigerian actresses who had reportedly been involved with Apostle Johnson Suleman intimately for money.

Reacting to it, Iyabo Ojo shared a video of her in a joyous mood.

She avowed that she was unbreakable, unshakable, and immovable.

‘I don’t make noise, and I move in silence,
“Omo logo 1 trillion….. unbreakable, unshakable, immovable….Oya give dem….Iyabo you tooooo set for all thanks to @olivevine_hair your wigs make sense die”.