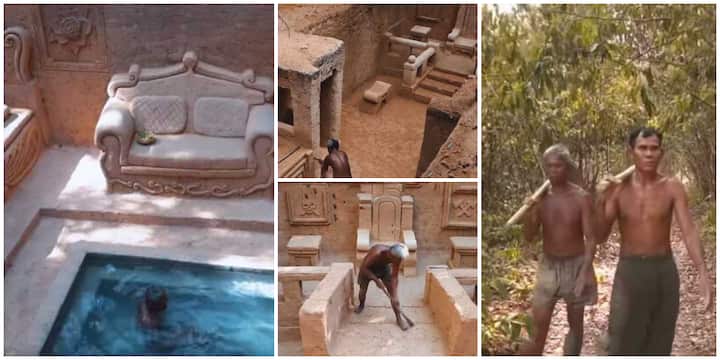 Four talented men from Cambodia have taken making items with mud to a new height entirely – they built a big house using only mud.

Nas Daily shared on Facebook a video of the incredible village mud house that has a swimming pool, cushion chair and other household items made with only clay.

They use special locally made tools to build:

Speaking with Nas Daily, a man identified as Molly said he noticed the creative works of Cambodians and sought to bring their special handy talents to the world by featuring their works consistently on YouTube.

Molly, a builder who is resident in Cambodian, added that he then found clay builders who reside in the jungle and would give them building plans to which they brought to reality using mud.

The four men are talented at digging clays using special locally made tools to create shapes and objects on the ground.

OTHER NEWS:  ‘My Friends Misled Me To Say Negative Things About Alaafin Of Oyo’- Queen Dami Tenders Apology To Her Husband, Begs To Return Home

Their creations have become tourists attraction
Creations as the big mud house usually take them up to a year and cost thousands of dollars to build.

The houses they build are however not habited by humans but abandoned dogs and puppies and are tourists destinations.

Molly noted that unfortunately clay houses they build stay up for up to a year after which they get destroyed either by rain or natural causes.

“I hope these men were paid enough and get their fair share to have at least a decent home and comfortable life..or maybe get themselves some medical treatment coz I noticed the one guy with cataract.They did all the hard work anyway, might as well give them what they truly deserve. Kudos to all their hard work!”
Maye Costa remarked:

OTHER NEWS:  Nigerian Minister Walks Twin Daughters Down The Aisle As They Marry On The Same Day

“No wonder the Angkor Wat along with the other temples were built like that. Cambodians are really talented!!!
“I will forever cherish my memory in Cambodia in its amazing people.”

“These guys descent from the people who built Angkor Wat. Their building skills have just been forgotten by the world because of wars, natural disasters and isolation from the rest of the world. Good to see that they are being rediscovered.”