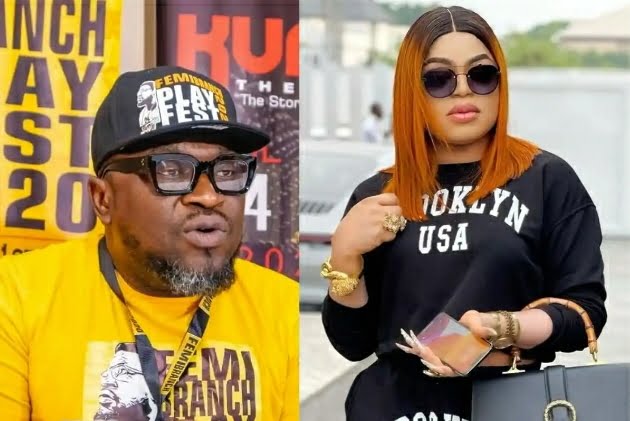 Remember when Bobrisky came in town for an event and utilized his Snapchat to express his excitement? He requested the Oba of Benin’s marriage with great joy.

Residents of the state were upset, and they protested him for making such insulting remarks about their beloved monarch, as well as threatening to deal with him if he was seen at the event for which he came.

Due to the threats he had received, Bobrisky was noticeably absent from the function he was meant to attend. He also publicly apologized for his remark.

In an Instagram live session, Femi Branch said that Edo indigenes came out to condemn Bobrisky’s statement because they revere their king. If Bobrisky asked a Yoruba king to marry him, the actor questioned if this would happen.

“Many people come up to me and say, ‘I don’t really enjoy Nigerian movies, but I do watch yours.’ With all due respect, it is one of the dumbest things anyone has ever said. Is my own film made in Togo? One of the reasons I admire Benin culture is because of this.

Take a look at what occurred recently. Bobrisky cracked a witty remark.

However, there are some institutions with which you should not joke.

Bobrisky could claim to be a Yoruba guy (or girl), but’she’ prefers to be called as such. He had to have been watching how some Yoruba Obas had been acting recently. That must have given him the confidence to make such a remark against Benin’s respected Oba. He knew the Oba of Benin isn’t just any king when he made that comment.

Some people believed the emotions were exaggerated, but Beninians are serious about their traditions. That’s because the Oba of Benin doesn’t ‘carry himself’ in the first place.

Our culture and traditions are vanishing by the minute, and no one seems to care. Benin’s indigenous people were outraged because their king doesn’t laugh with them, and their king doesn’t joke with their tradition. Do you believe people would have talked about Bobrisky’s statement about a Yoruba oba if he had said it about a Yoruba oba? Let us be honest with ourselves. Is it normal to see our kings frolicking with ‘commoners’ on Instagram?”

“I’ll break and Wrack you, but you’ll still call me baby,” she says. -BB Potential Suitors Are Told By Naija Angle