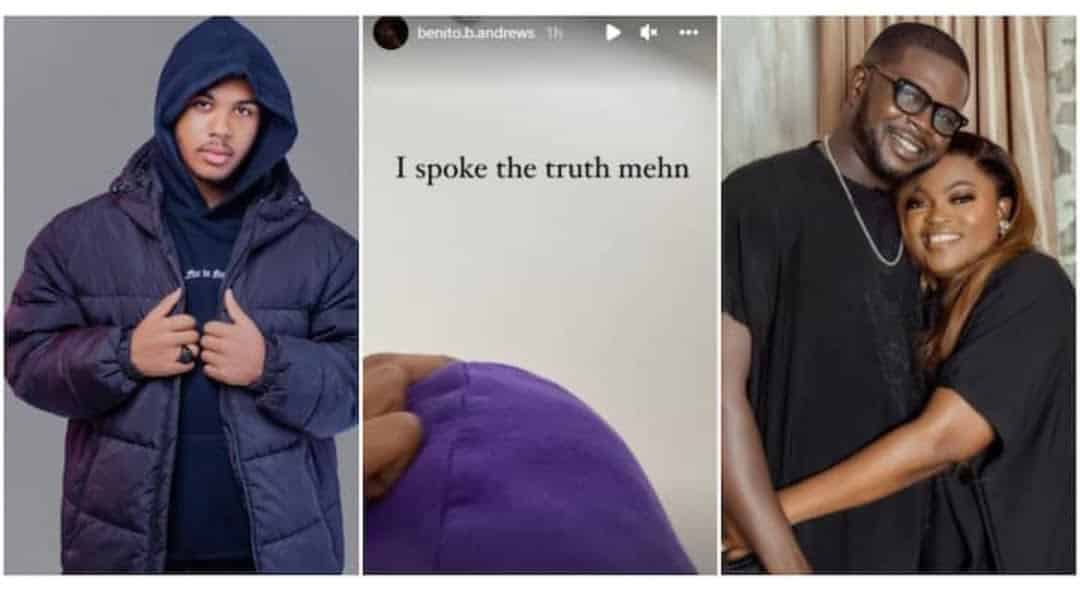 Popular Nigerian actress Funke Akindele’s stepson, Benito, has finally spoken up on the news of her crashed marriage with his father, JJC Skillz.

Taking to his official Instagram page, @benito.b.andrews, the teenager shared his thoughts on the news of their separation.

Benito seemed to get validation from the ended union and noted that he was speaking the truth when he talked about the celebrities’ marriage.

“I spoke the truth.”

See the screenshot below:

Recall that Benito made headlines a few months ago after he opened up on there being trouble in Funke Akindele and JJC’s marriage.

According to him, the actress is not who people think she is and living with them was a horror.

Read what some internet users had to say about the young boy’s post below:

MORE:  “JJC Skillz Was Sent Out Because He Did Not Submit To His Wife, Funke Akindele” – Lady Reveals (WATCH VIDEO)

“This boy’s interference in the marriage must have contributed in one way or the other. The boy is very I’ll mannered. Let me ask him, why did his father marry Funke instead of his mum, since his mum is good and Funk’s is bad. When a woman is overly stretched beyond her elastic limit, either she breaks or bounces back. #freefunkeakindele.”

“My own marriage will work.”

“Congratulations to you and your mum.”

“Can we just give justice to everybody so people can stop reacting? Those about to set ring light should chill.”

“E be like Funke Na really bad person oh, because all of these people cannot be lying I guess

“U did Jare, both world fans no let u talk.”

Funke Akindele and her stepson, Benito, as well as his mother, Mella, were recently at loggerheads on social media.

Mella decided to hit the actress where it might hurt her most by exposing the faces of her twin sons with JJC Skillz.

Taking to her Instagram page, Mella posted a photo of Funke, JJC, and their sons facing the camera during what appeared to be a Christmas holiday.

I’ve Been in and Out of Hospital”: Itele Reacts As Clip Showing Poor Living Condition of Family Goes Viral