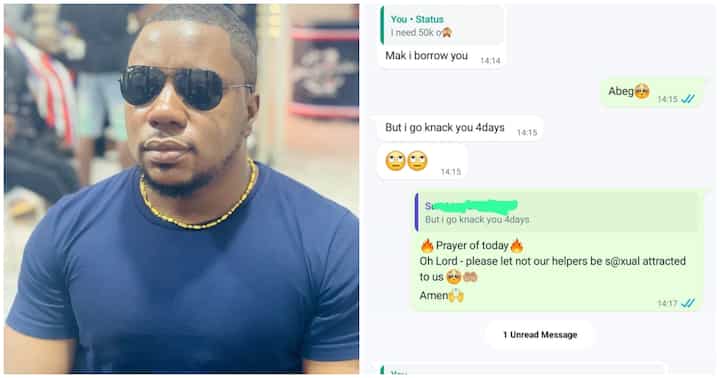 In a Whatsapp conversation he made public, the lady made it clear to him that she would like to go to bed with him

A Nigerian man, Chizitere Ahubelem, has urged netizens to pray that their destiny helpers are not se*xually attracted to them as he shares his encounter with a lady.

The leading Imo state social media influencer popularly known as Chizzy Whizzy shared on Facebook his Whatsapp conversation with the undisclosed lady after he begged to be assisted with N50k.

The lady had offered to help him, to which he asked her if she would not sleep with him because of the money.

OTHER NEWS:  HOW LONG DO SHORT PEOPLE LIVE’ JOKE TAKES OVER TIKTOK

On the authenticity of the incident, the serial philanthropist and humanitarian confirmed to W that it happened on Thursday afternoon.

Chizzy said that he did not have any money in his mobile app at that particular time and was too lazy to do POS. In his words:

“I didn’t have any in my transfer app on that particular account, and I was lazy to go to the POS with the cash I had to deposit.”

Apart from being a programmer, Chizzy is a co-partner with Cars45 as well as an OAP at HOt FM 99.5 Owerri.

“Ah! You no wise. Na you suppose knack her collect the 50k not the other way round.

“Even she wey say make una knack for 4 days know say after knacking you no go pay the Moni bac.

“God Abeg bring this kind lady for my place.”

“You dey cheap oh, this means Chizitere Ahubelem is 12,500naira per night. With 100k you go dey woman house for 8days.”

“No free money in free town, you must collect knacking join.

“Naso e suppose be. If you want money you do the needful.”

Okada rider rejects lady’s request that he sleeps with her

Meanwhile, WOTHAPPEN previously reported that an okada man had turned down a lady’s sexual advances at him.

OTHER NEWS:  "Thank You Mama": Man Builds His Mum a House Years after She Worked as a Househelp to Support Him

The lady in a video shared on TikTok spotted an okada man, walked up to him and handed him a note.

The okada man simply read it, tore the paper and focused on his business, quite to the lady’s surprise. She had stood at a distance watching to see his reaction and was quite disappointed.

Woman who sent her daughter N7.4M while she was abroad returns home to discover the money has vanished