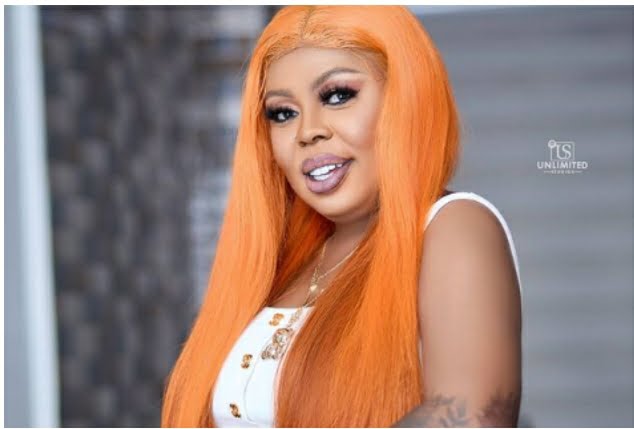 Ghanaian actress and social media personality, Valentina Nana Agyeiwaa, also known as Afia Schwarzenegger has sounded a strong warning to her naysayers and the likes of Ayisha Modi, Mzbel, and Nana Aba Anamoah, saying that they should not revitalize the demons she has been keeping at bay for some time now.

Afia Schwarzenegger is well known to have gone after her foes on social media, matching them boot-for-boot for invading her privacy. The likes of Ayisha Modi, Mzbel, and currently Nana Aba Anamoah have all been victims of her melodrama. She has never taken it lightly with anyone who tries to tarnish her hard-earned reputation and also drag her family in the mud on social media.

Well, in a post sighted on her IG wall, Afia Schwarzenegger who was once accused of gossiping about her buddy, Tracey Boakye to Ayisha Modi stated clearly that there is no way she will badmouth anyone in their absence.

She also said that she has never been the originator of any of her brawls off and on social media but when her demons are triggered within her, she will not spare anyone.

In other news, following her claims that the American rapper, Belcalis Marlenis Almánzar, well known as Cardi B is her twin sister, Akuapem Poloo, a Ghanaian actress and socialite has taken to her social media to imitate her looks in a photo she shared on her IG wall.

Cardi B and Akuapem Poloo’s relationship was made possible when she visited Ghana and interacted with a number of celebrities. When she discovered they had a lot in common, she began referring to Akuapem Poloo as her twin.

“You Are My Spirit Animal”-Tonto Dikeh Tells Afia Schwarzenegger