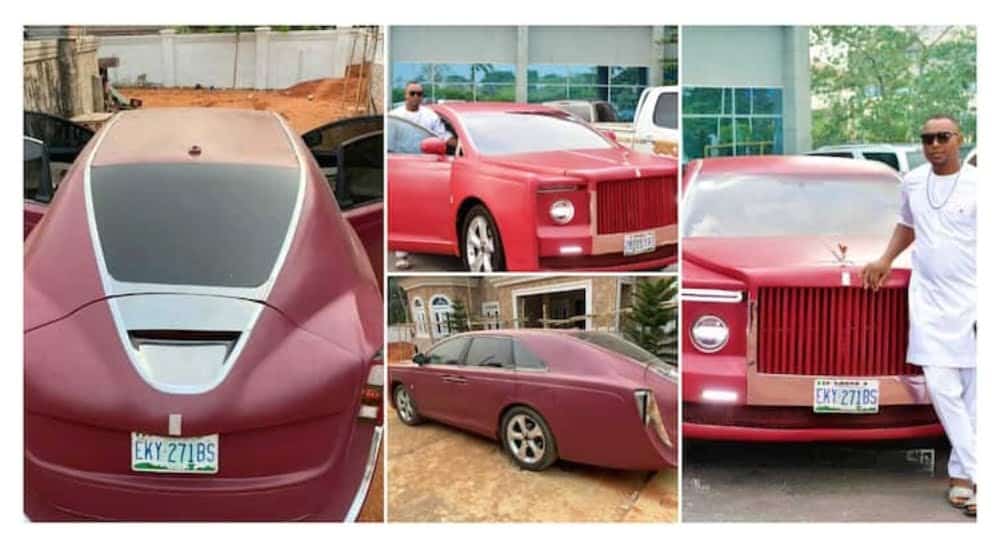 When you talk of luxury whips, the Rolls Royce Phantom Sweptail redefines that. The car which was made in the United Kingdom by Rolls Royce Motor Cars and goes for $13 million (N5.3 billion) is owned by a few wealthy folks..

Nonso Offor, a young Nigerian man went viral around May 2022 for converting his Toyota Venza car to a Rolls Royce Sweptail which is said to be the most expensive car in the world. He tells Wothappen, in this exclusive interview, how he saw it in a dream.

Nonso said he did everything himself

Photos of Nonso’s refurbished car left netizens wondering how he did it.

In a chat with Wothappen Victor Duru, the 35-year-old who hails from Oraifite town in Ekwusigo, Anambra said everything in the car was handmade.

The Lagos-based businessman took pride in the fact that he did everything himself without being aided. He said:..

“Everything (the refurbished car) you see there is handmade. it is like I removed the body of Venza and put the body of Rolls Royce Phantom Sweptail. I made it myself. The only thing used from the Toyota Venza is its engine. I did everything by myself.”

While stating that it took him a year and 6 months to complete it, Nonso claimed that knowledge on refurbishment came to him in dreams – he said God showed it to him.

“It is God that inspired the refurbishment. Whenever I sleep, I dream about cars. I see how to do cars and many other things in my dream. I would be seeing the cars I have not seen before in my dream.”

Nonso revealed that he spent a total of N13m in refurbishing the Toyota Venza.

MORE:  In a classroom, a video of a young girl praying for the soul of her friend's late father melts hearts - VIDEO

For reasons he didn’t say, the talented man said he didn’t go to the university and stopped at the secondary school level...

The Nigerian who is into pool manufacturing for a living added that not going to university doesn’t take away his ingenuity...

“I stopped in secondary school. I didn’t go to the university. Everything is all about God. It is destiny. It is God that showed me everything in my dream. This one is not all about university. It is who you are,” he explained.

He hinted that he is working on another project that would blow minds but is being limited by finance.

Buhari, Malami lose at the Supreme Court over electoral act