Big Brother Naija reality star Tacha has slammed Twitter after he described a group of ladies as prostitutes.

The Twitter user identified as Mawrongz Jnr made an assertion that prostitution starts when a lot of ladies develop the notion that they are not fit to suffer. According to the young man, any lady who thinks she is too beautiful to suffer is a prostitute.

“Prostitution starts when a girl thinks she’s too beautiful to suffer is a prostitute”, the Twitter user tweeted. 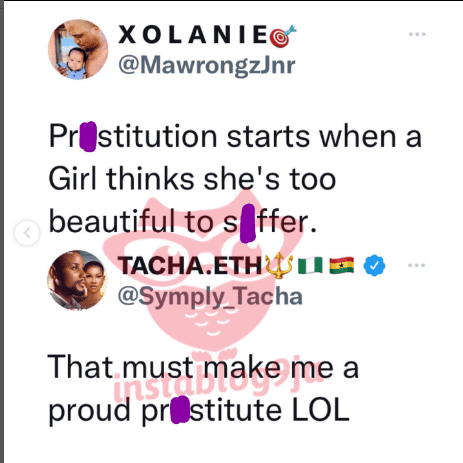 Social media was flooded with new photos of Chioma wearing a revealing nightgown inside Davido’s home, with the caption, “Second Baby Calling.”

Wizkid Is A Born Star No Doubt – Akon Reveals

After 21yrs Young Lady Changes Her Hairstyle, Looks So Beautiful

Aisha Buhari has asked the Nigerian people to forgive her husband for his poor economic leadership.