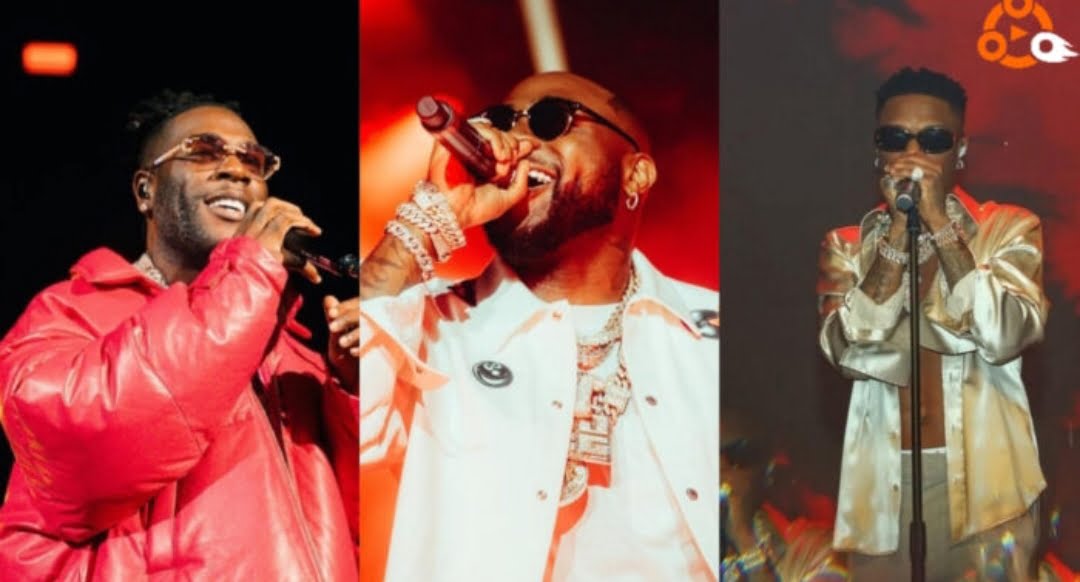 This year, which Nigerian musician is the richest on Forbes? Hip-hop artists have taken the music industry by storm, amassing enormous fortunes and securing lucrative endorsement deals that will astound you.

When it comes to earning millions of dollars as a musician, Nigerians are no amateurs. Their record labels put out chart-topping singles, and they host concerts and shows to promote their brand through the use of music.

Top 10 richest Nigerian artists in 2022 will be listed here, along with their net worth (investment) and even their endorsement deals that set them apart from the competition.

According to Forbes, Davido is the richest Nigerian musician in 2022. Moreover, Forbes included him in its list of Africa’s 10 wealthiest musicians for 2021, demonstrating his status as a global star.

David Adedeji Adeleke is the biological son of Dr. Adeleke, one of Nigeria’s wealthiest businessmen. Most people assume that Davido’s wealth is a result of his father’s, but this isn’t the case because Davido is wealthy in his own right.

In the years since he first entered the music industry, he has won numerous accolades. Mobo Award, Best African Act and so on. He also runs a successful record label under his own name. He is well-known for releasing hit songs and has collaborated with many of the country’s top singers.

SONY records, a world-renowned music label, has signed a lucrative recording deal with the famously wealthy celebrity. Davido, whose stage name is OBO, has been touring Africa with his band, the ’30 Billion Gang,’ since last year.
“IF” and “Fall,” two of his most popular songs, have amassed over 60 million views on YouTube alone. For those views alone, Davido claimed in an interview that he had earned a cool $1 million.

Davido owns a number of properties, vehicles, and other assets. His father’s company employs him as a director, and he commands fees of up to ten million dollars per show. Chioma, his current girlfriend, and he recently purchased a private jet and signed on with Infinix as their brand ambassadors. According to Forbes, he is worth N20 billion.

“Wizkid” (Ayodeji Ibrahim Balogun) is the second richest Nigerian music artist of 2021 according to Forbes. He has been dubbed “Star boy.” Wizkid’s rise to fame and fortune can be traced back to his time at EME records, where he was signed by Banky W.

Despite being one of Nigeria’s most popular celebrities and an award-winning singer, Wizkid has become an international sensation. With Drake, Tinie Tempah and many other popular American artists on his song list.

Previously, he’s been nominated for a Grammy Award, MTV’s Baze Awards, and won the Best African Artist award. As he continues to tour the United States and Europe, his music remains at the top of the Billboard Hot 100 Music Chart.

In the country, Wizkid’s manager charges 12 million pesos to perform on stage, but when he is called to perform outside the country, he charges more. Music label Starboy was founded by Wizkid, who is also its CEO.
Wizkid, like many other musicians, has benefited from lucrative endorsement deals. To name just a few, he signed deals with Pepsi, Globacom, and even MTN for a combined total of N40 million.

Wizkid enjoys a lavish lifestyle because of his fame and fortune. He owns palatial estates in the United States and abroad. According to Forbes, the artist’s net worth is estimated to be N20 billion in Nigerian naira.

Don Jazzy will be Nigeria’s wealthiest music producer by 2021. Aside from Tiwa Savage, Reekado Banks, Dr. Sid and Korede Bello he is the founder and CEO of the MAVIN record group.

Only Wizkid, Davido, and Collins were included on Forbes’ list of the richest African musicians in 2021. His real name is Michael Ajereh Collins. When writing this, Don Jazzy has helped countless people through his social media account and has remained a dominant figure in the music industry.

OTHER NEWS:  Cheers to happily ever after beautiful” – Adebimpe Oyebade writes, shares video of her wearing her wedding gown

Don Jazzy is rumored to charge upwards of N600,000 for the production of beatings for songs. Most of the artists signed to his record label can be heard using his backing vocals. He has a slew of multi-million dollar endorsement deals under his belt.

Don Jazzy’s extravagant lifestyle is further evidence of his status as one of Nigeria’s most well-off musicians. He has previously stated that he does not want to get married, but he may do so in the near future. Forbes estimates his fortune to be N17 billion.

D’banj, a stage name for Koko master, is one of the few Nigerian musicians to have achieved financial success through their music. Oladapo Daniel Oyebanjo, his birth name, is better known as D’banj on stage.

He was a member of Don Jazzy’s famous MOHITS group before they broke up. He hasn’t looked back since and has made a name for himself in the music industry, defying those who predicted he wouldn’t be able to do so without Don Jazzy.

Koko master’s music is no longer as popular as it was in the past, but Forbes still values him at N16 billion naira because of the numerous endorsements he receives from top Nigerian companies.

To get D’banj to perform at their event, the show’s organizers allegedly have to pony up 5 million naira. This is massive, and he does it weekly.

Even after all these years, he is still one of the best hiphop singers in the country. Innocent Ujah Idibia is the real name of 2face or 2baba. Before signing with the Kennis Music Record Label, he was a member of a band called “plantashun boiz.”.

2face rose to prominence after releasing a string of hits with the group. It wasn’t long ago that he was the wealthiest musician in Nigeria and all of Africa, long before the likes of many newer artists rose to prominence.

An international superstar, Idibia has sold millions of records worldwide and topped the music charts with his unique and catchy tunes, making him a household name. Since Tu Face released African Queen, it has remained a classic.

As well as being a talented singer, he runs his own record label called “Hypertech.” Tu Face is also a successful businessman with a slew of assets to his name. In addition to his numerous endorsements, 2Baba charges about N2.5 million for a show or event.

In addition to the children he has with Annie Idibia, he also has children from previous relationships. According to Forbes, he’s worth N15 billion.

The duo used to be Nigeria’s richest musician duo according to Forbes, but since they split up in 2022, even though they are each still very wealthy, they have dropped in the rankings.

Rudeboy The Psquare brothers were Paul Okoye and Peter Okoye, better known as Mr. P. In addition to Nigeria, they dominated the continent of Africa as a whole. They were a hit with everyone because they could sing and dance at the same time.

In the past, Forbes estimated them to be worth $20 million because they topped the musical billboard nearly every time and even charged the highest gig fee for a Nigerian artist for any show or event.

Jude Engees, their older brother, produced and released their albums through Square Records, their former record label. Since their breakup, both artists have continued to prosper and remain among Nigeria’s ten wealthiest musicians.

The general public has no idea that these well-known singers have assets and investments outside of their singing careers. We know that Peter and Paul owned a large number of vehicles, as well as land, during their time together.

The likes of Kia cars and Olympic Milk have signed Peter okoye as a sole endorser. Mr. P, on the other hand, is awaiting the official unveiling of his new clothing line. In total, they are worth $8 billion.

Inetimi Alfred Odon is Timaya’s full name. A popular Nigerian musician, singer, and songwriter, his name is widely known. Timaya has risen to stardom since launching his musical career in 2005 and continuing to do so to this day.

Forbes estimates Timaya’s wealth at N7 billion. In addition, he runs a successful record label called Dem Mama Soldiers, home to the South South hip hop group. Millions of copies of his songs have been sold all over the world.

Timaya charges 8 million Naira to perform anywhere in Nigeria and beyond, which may come as a shock to you. As of now, Timaya has lucrative endorsement deals with GLOBACOM and Hennessy, two of Nigeria’s leading telecommunications companies.

Olubankole Wellington, better known as Banky W, is the 8th richest Nigerian musician, according to Forbes, with a net worth of N6 billion. This well-known artist’s career has taken off since the release of his hit song, “Ebute metta.”

Wizkid, Skales, and other big names in the music industry were brought to prominence by him before he got married to Adesua Etomi. The majority of Banky W’s songs are love songs.

“0809ja 4 lyf,” which Etisalat used as their anthem, was one of his most popular songs. According to reliable sources, he received a colossal sum of money for just that one act.

For example, Samsung, Uber, and others have hired Banky W as a brand ambassador. The talented singer has branched out into acting, film production, and speaking engagements.

Phyno fyno is the ninth-richest musician in the country. Nelson Chibuzor is Azubuike Nelson Chibuzor. For the past decade or so, he and Olamide have been two of the most powerful figures in the entertainment industry.

The best Igbo rapper in Nigeria is currently him. The multi-platinum hip hop artist has established a name for himself that may be hard to top. With his songs, he stands head and shoulders above the rest of today’s music scene in the US. As Phyno’s assets and endorsement deals show, he enjoys a lavish lifestyle.

His money has been invested in real estate and other money-making ventures like Olamide’s. There are no signs of either of these celebrities slowing down in the rap game. Phyno has an estimated net worth of N5.5 billion and charges concerts in the range of N2.5 to 3 million Naira.

According to Forbes, Olamide ranks 10th on our list of the richest Nigerian musicians in 2022. He goes by the stage name “Badhoo” and has a long list of hit singles to back up his claim as one of India’s top artists.

Bariga, Lagos, is where he grew up, and he’s been a star ever since he first appeared on stage. Olamide is the CEO of YBNL Nation, Nigeria’s most well-known record label, in addition to being one of the country’s best rappers.

Throughout the world, he has sold more than 40 million copies of his music. Owo Blow (featuring Ilefo Illuminati) and Goons Mi (featuring Olamide) are some of Olamide’s best-known songs. He has also had a number of top ten singles to his credit.

This well-known Nigerian musician derives a significant portion of his income from working with other musicians. Olamide is a brand ambassador and a successful businessman. A deal worth 30 million naira with Ciroc and N80 million with Guinness and N50 million with 9mobile (formerly Etisalat) have been signed by Olamide as brand ambassadors.

He also charges between N3 million and N5 million per show when he travels to countries like Ghana, South Africa and Europe for his annual tour of the United States, the United Kingdom, and France. It is estimated that Olamide has a net worth of N5 billion. In addition to his numerous land holdings, he has made investments in the oil and gas industry, owning two filling stations. He is not currently married, but he is the father of children.

How to cancel xbox gamepass