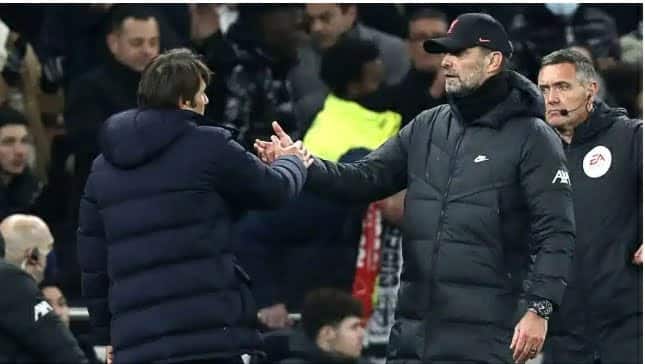 WOTHAPPEN Reports That Tottenham Hotspur manager, Antonio Conte, has told his Liverpool counterpart that “we cost you the title”.

Conte was referring to the 1-1 draw on Merseyside six months ago which cost the Reds dearly in the run-in.

When asked if Klopp had been ungracious after a damaging deadlock which handed Manchester City the advantage, Conte agreed: “Yeah, but if you remember he lost the Premier League for this result.

“I understood his frustration. They lost the title for these two points (dropped). But you know, instead we reached the Champions League with that draw.

“It’s OK, every coach has to speak for his team – and for every coach it’s important to understand the best strategy to reach a good result. Honestly, I have seen again the last game we played against Liverpool and, if there was a team that deserved to win, it was Tottenham, not Liverpool.

OTHER NEWS:  How to fill out Mega Millions ticket ahead of tonight’s $1 billion draw

“But I understand after a game when you felt you lost the Premier League to say something wrong against another team, but he has said sorry because he understood. No problem for me. When you are angry, it’s very difficult sometimes to control your emotion.

Liverpool must be proud

“First of all, I think that Liverpool have to be proud because in the last five years they were the big, big rivals for Manchester City. Without Liverpool, I think City could do in the same way like Juventus was in Italy (nine Serie A titles in a row).

“For this reason, they have to be proud to reach this level and I think they improved a lot in these years. Sure, they spent money, but Klopp has changed Liverpool and the club gave him the possibility to invest.

OTHER NEWS:  “I think it will be really difficult for our opponents” – Liverpool star highlights Darwin Nunez trait after he grabs four-goal haul against Leipzig

“We are talking about an important club in the world with the possibility to spend a lot of money, but it’s important to spend the money in the right way. Sometimes you can sign players for £50million, £60m, £80m, £100m, £120m – that happened in the past and you wasted your money.”