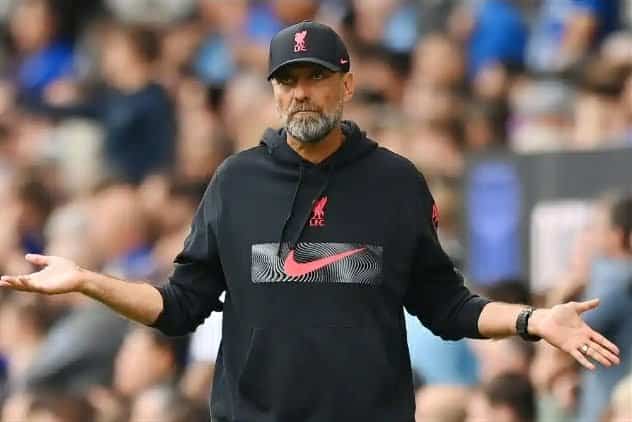 WOTHAPPEN Reports That Former Tottenham and Aston Villa manager, Tim Sherwood, has claimed Liverpool’s Jurgen Klopp will leave the Premier League side at the end of this season.

Sherwood believes Klopp has taken the club as far as he can and will leave Anfield in the summer.

“The problem Liverpool have got is this team is used to challenging for titles,” he said on the Kelly and Wrighty Show.

“It’s gone for them this season. They’re not going to win the Premier League, so where’s the motivation and drive from the players?

“The club will say they cannot be out of the Champions League, but it can be tough for players when they’ve challenged for titles and all of a sudden it’s taken away from them. I think it’s very difficult for them.

“I don’t think Jurgen Klopp is there next season. There’s a conversation to be had. I’m not sure Jurgen picks them up from where they are and makes them challengers again, I really don’t. History says he doesn’t do that. He’s very good and drives teams all the way. But it’s going to be a fight to get in the top-four now. If they miss out on the top four it’s a rebuild, a total rebuild.

OTHER NEWS:  KIRSTIE ALLEY’S FAMILY THANKS MOFFITT CANCER CENTER FOR TAKING CARE OF THE ACTRESS

“I don’t think they’ll sack him, but there will be a conversation where both parties agree that Jurgen has taken them as far as he can and they go for a new challenge. That’s just my hunch when I look at him and the team.”

The Liverpool boss has revealed he spoke to Steven Gerrard after he was sacked by Aston Villa.

Klopp has backed the former Reds captain to bounce back from the disappointment.

Gerrard was dismissed by Villa on Thursday after their 3-0 defeat at Fulham, which left them 17th in the Premier League.

The 42-year-old began his coaching career in Liverpool’s academy during Klopp’s time in charge.

And the German said: “I’m very sure he will come back.

OTHER NEWS:  DOES JENNA ORTEGA HAVE A BOYFRIEND IN 2022?

“When he was at the academy we obviously created a bit of a close relationship and I always followed him.

“We had a little exchange this morning but nothing too deep, not a long conversation.

“I can imagine it’s disappointing for him because of the ambitions he had, but I don’t think we have to worry about Stevie. He knows the game long enough and these kind of things can happen.

“We all get knocks here and there – it’s about how you respond. A lot of great managers out there had to leave their previous clubs for different reasons. Some of the best did that quite frequently during their career. They turned up somewhere else, learned from it and found a better situation.

“Now I hope he takes a bit of time for him because, since he finished his career, he’s pretty much working all the time. Maybe use it now for himself to recharge.”

EPL: ‘Doors are not open’ for black managers in football – Vieira