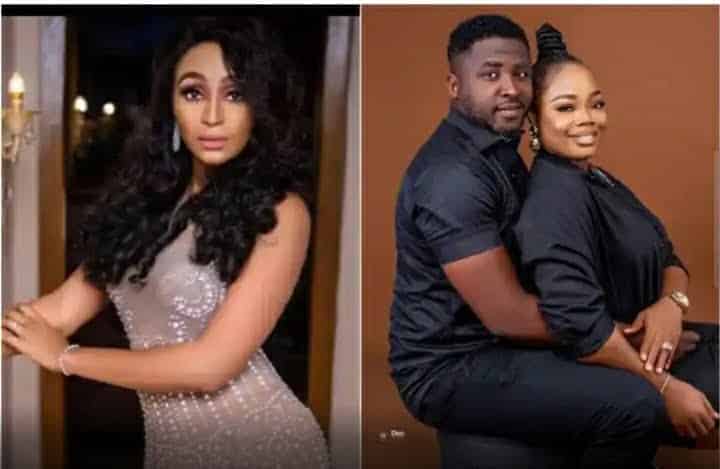 Nollywood actress, Ifunanya Igwe has called out her male colleague, Onny Michael for being a snitch and trying to humiliate her.

The actress recounted how the actor tried humiliating her at her event, but unfortunately, he ended up humiliating himself.

She revealed that despite considering the actor a friend, he never ceases to snitch on her or judge her every action.

Ifunanya accused him of having extra marital affairs as she claimed he was fond of sleeping with everything on skirt.

She wrote, “So something happened at an event two weeks ago which was very ridiculous and hilarious at the same time. Someone I considered a friend and colleague whom I had zero beef with intended to humiliate me but the table turned against him instead. I got your message the last time (the nasty things you said about me) and I wanted to give you a call but I figured you don’t worth my time and energy so I saved it till you decided to fuck up again”.

“For the sake of the people that I respect so much in the industry and the people we went to their event, I’ll avoid going into details but @omnymichael stay off my lane. I’m asking nicely because next time, it wouldn’t be funny. Everyone can concur to the fact that I’ve always been on my lane. I have mutual respect for everyone and I’d like it to continue that way but I have zero tolerance for snitches and people who think they’re better off than everyone else. You go on set to work and okay with your female colleagues but call them useless and cheap once they turn their back. Coming from a man like you, I wonder how your wife does cope. Before ever opening your mouth to judge or trash talk another person, you should consider acting like a married man and stop going around the whole place sleeping with everything on skirt. That way, you’ll be making sure you got no stain on you while castigating others”.

The good news was let out by another actress Umenwa Cynthia, who took to her Instagram page to congratulate the new mum.

She also prayed for the new mum to receive blessings.

Umenwa Cynthia wrote, “Today has been so hectic for me in my office. I just logged in now to see what I have missed and my heart is filled with joy that my friend Ifunanya Igwe gave birth to twin boys. Oh Jesus is already in my neighborhood. I am getting ready for mine oh. Jesus my joy knows no bound.”

She added, “The best news online today for me @ifunanyaigwe.kmj the heavenly powers has completed it for us we say jesus thank you 🙏💯❤️🙌
As everyone around me is giving birth to twins let it be in the record that I’ve taped into this grace so when it come to pass do not be surprised 🤸‍♀️🤸‍♀️🤸‍♀️🤸‍♀️🤸‍♀️🤸‍♀️
My coach is now mama Ejimma boys 🤸‍♀️congratulations @ifunanyaigwe.kmj and @adaezeeluke I Dey vex for you why you no invite me come the baby shower why 😡one year suspension of friendship from me until you appease me.”

“In times of pain and struggle, I found comfort in him” James Brown pens touching tribute to Denrele Edun