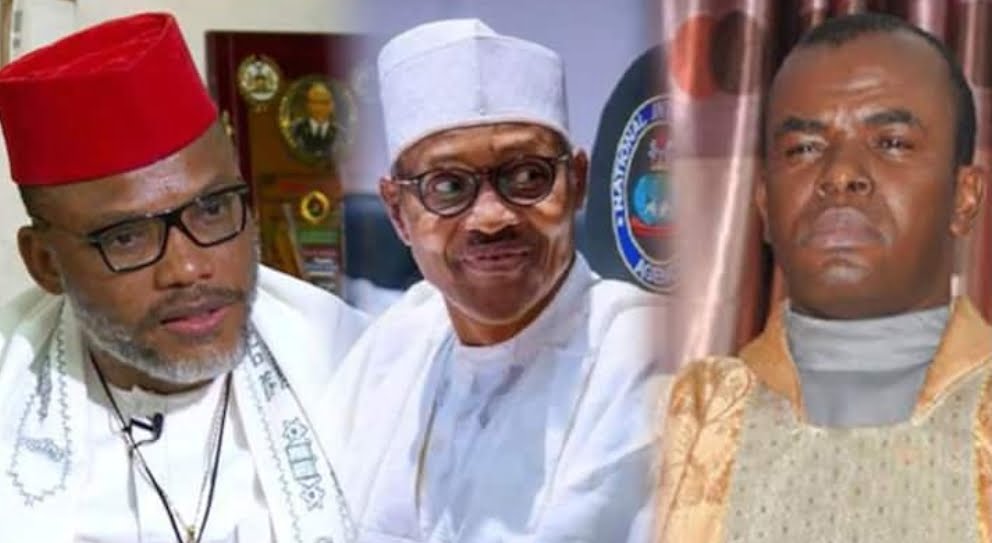 Nnamdi Kanu, the embattled Biafra leader, and other detained agitators have set the year 2022 as their release date.

Father Ejike Mbaka, a fiery Catholic priest and spiritual director of the Adoration Ministry Enugu, has stated that when he declared that Muhammadu Buhari would be Nigeria’s president in 2015, he did not ask anyone to vote for him.

According to The Nation, the cleric claimed that he only spoke what God told him to say ahead of the general election and that people had taken his words out of context.

The man of God disclosed this in his 2022 New Year message during the crossover night at the Adoration Ground, Emene, Enugu state.

He told his congregants:

Explaining further, the fiery priest noted that whether or not people voted for him, Buhari would have still emerged as president because it’s a vision.

Recall that Buhari had won the 2015 presidential election, defeating the incumbent, Goodluck Jonathan.

I see Nnamdi Kanu as my son

Father Mbaka who has decided to pray for the leader of the Indigenous People of Biafra (IPOB) Nnamdi Kanu and other agitators said nobody should criticise his stand, The Punch reports.

He appealed to his fellow priests not to castigate him, saying he’s closing anybody’s mouth and nobody should try to close his own.

“If I use my mouth to bless Nnamdi Kanu and you don’t like it, please use your own mouth to curse him. Leave me to bless him.

“I see Nnamdi Kanu as my son. Every Igbo man and woman is my child. You may not understand the spiritual authority I have on this land.”

The Catholic priest noted that if churches can pray for Nigeria then nobody can stop them from doing the same for Kanu and others in trouble.

“This year will be for Kanu and those held for agitations. God will show them mercy this year.”

Sylvester Oromoni: An autopsy revealed that a Dowen student died as a result of ‘chemical intoxication.’