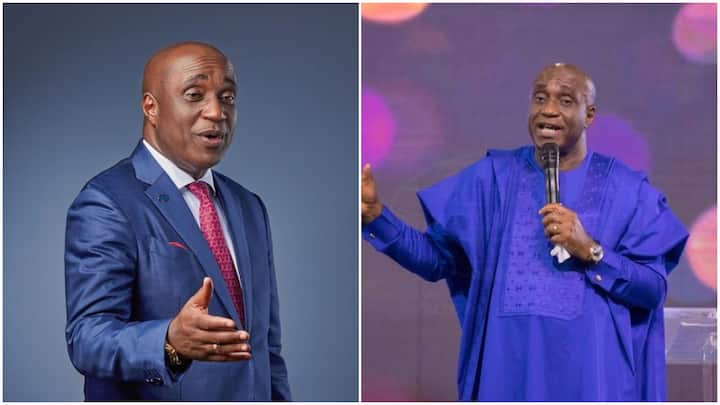 The founder and head pastor of Salvation Ministries, Pastor David Ibiyeomie, has waded into the recent Chrisland issue involving minors and how bad parenting could be blamed.

In a sermon reshared by Goldmyne, the clergyman said that no parent should buy their children a phone until the wards get to the university.

I never gave my son a phone

He said that it may be hard, but parents have got to stand their ground. Giving a personal example, he revealed that he stopped his son from using a phone until he got to a higher institution and he values that lesson today.

Phone is a distraction to kids

Pastor Ibiyeomie said that when a child is using a phone, it could be quite a distraction as many things pop up.

He added that parents could install land phones in their homes for communication, arguing that the children could always use their parents’ mobile devices.

OTHER NEWS:  She Owned Up to the Act: Wizkid’s 1st Baby Mama Weighs In on Chrisland Saga, Says School Shouldn’t Be Blamed

Watch his sermon below:

Below are some of the reactions:

“I swear!!! When you tell the rich people this, they will say it’s because you are poor.”

“Your own kids had phone at tender age too sir, no come here con dey do eye service.”

“We have parent guild in gadget – it’s not phone – children need to learn wrong from good—you have to expose your children and let know see good and also see the bad side of things … teach them don’t hide it from them.”

In the meantime, wothappen.com earlier reported that the Lagos state government has shut down Chrisland school indefinitely following the reported uproar over a “immoral behavior” performed by children during a trip to Dubai.

The shutdown notice was contained in a press statement on Monday, April 18. A part of the statement read:

“The statement read: “The attention of the Lagos State Government has been drawn to the alleged sexual violence case involving students of Chrisland Schools which occurred in Dubai, United Arab Emirates.”

“It is pertinent to note that all allegations are being investigated by the relevant Ministries, Departments and Agencies, including the Ministry of Education, Office of Education Quality Assurance, Ministry of Youth and Social Development, Ministry of Justice and the Lagos State…”

How To Solve NPower Blank Dashboard And NPower Payroll Issues