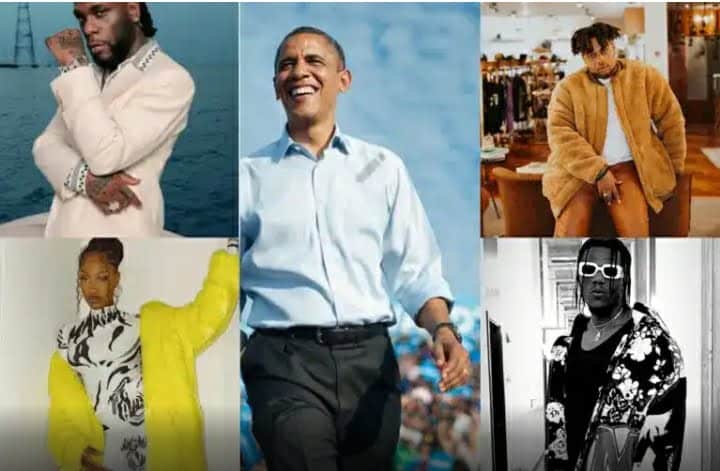 Every year, the former president always shares his favourite playlist during summer.

According to him, he gets excited to share it with his millions of followers as he has learned about so many new artists from their replies.

He added that their replies are an example of how music can bring us all together.

In the past, Rema and Wizkid had made it to his playlist, but this year, the singers didn’t make it into his list.

Fast-rising singers, Tems, Buju, and Pheelz made it to the list as well as Grammy award-winning singer Burna Boy.

Sensational singer and the queen of the moment, Tems’ song Vibes, was second on his playlist.

Pheelz & Buju hit song, “Finesse” also made it to the playlist as well as Burna Boy’s Last Last.

There is no doubt that Nigerian artists are making the country every day with their record-breaking achievements.

“Every year, I get excited to share my summer playlist because I learn about so many new artists from your replies – it’s an example of how music really can bring us all together. Here’s what I’ve been listening to this summer. What songs would you add?”.

Wothappen recalls Mavin singer, Divine Ikubor, popularly known as Rema made the Obama playlist in 2019 with his hit single “Dumebi”, Nigerian singer, Wizkid also made the list in 2020.

Wizkid, whose real name is Ayodeji Ibrahim Balogun, made number 15 on the list with his new single “Smile”, featuring American Grammy winner, H.E.R.

Obama shared the selection with his followers on the micro-blogging platform Twitter in continuation of an annual tradition.

Over the past few months, I’ve spent a lot of time listening to music with my family.

“I wanted to share some of my favorites from the summer, including songs from some of the artistes at this week’s @DemConvention. Hope you enjoy it,” he wrote.