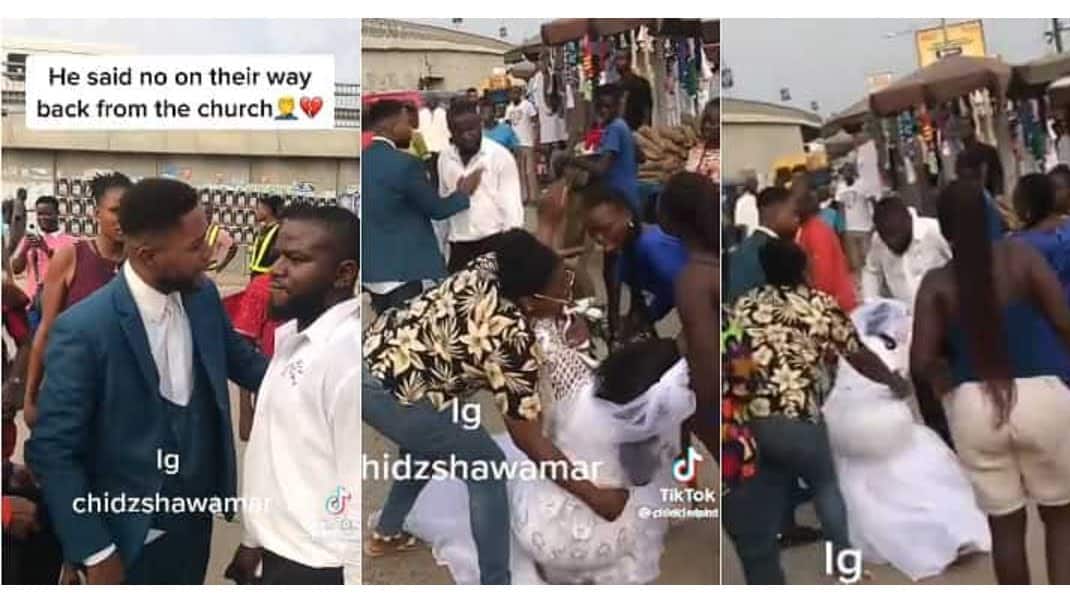 A newlywed bride broke down in tears on the road as her husband denounced their union in the presence of everyone.

While on their way back from church, her husband surprisingly made a u-turn and cancelled the marriage.

Despite efforts by the bride and some other eyewitnesses to change the groom’s mind, he refused to retrace his steps.

A Nigerian groom shocked everyone after dumping his beautiful bride on their wedding day.

In a viral video, the angry husband was heard denouncing his marriage, stating that he cannot go home with her.

Reacting to this, the bride broke down in tears and chased after him, but the young man remained adamant.

Eyewitnesses also did their best to proffer a solution to the problem, but nothing worked since the young man had already hardened his mind. He however did not reveal what caused his decision.

“At least u guys didn’t disappoint ur guest that came from far and near.. provided, rice and drinks went round! U are free to do whatsoever after the wedding!”
Geroge O. Commented:

“Pls allow your guest to eat the rice and chicken in peace before you guys seperate. You can seperate at home bikonu. What goes around.”
Isi Olie reacted:

“He must ave discovered about her Past Body Counts. Nice one.”
Dalton Brown added:

“This is serious,I was wishing it was a skit!”
Esumo Florence added:

2023: ‘We don’t blame you, you are only after your pockets’ – Nigerians drag Mercy Johnson after she posted her support for APC