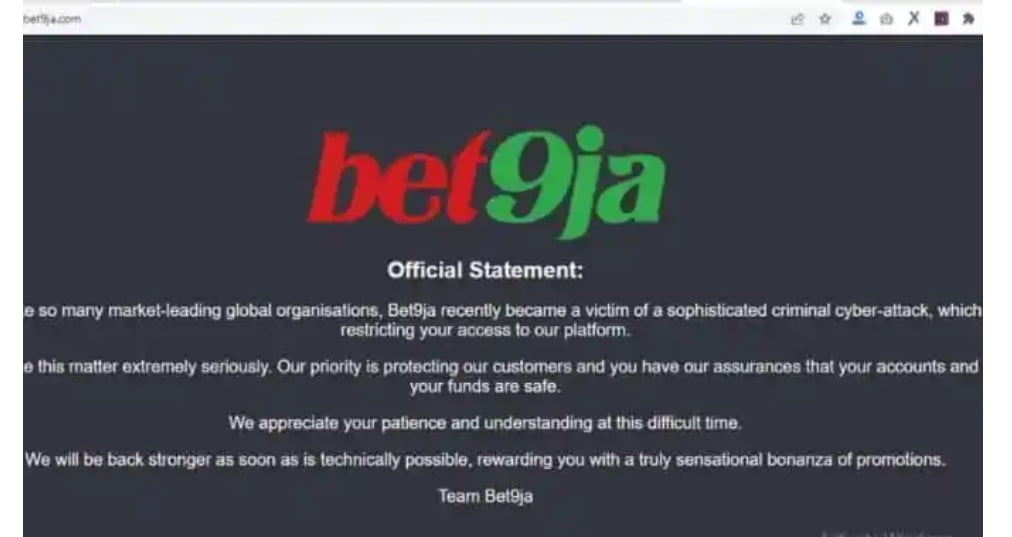 A Nigerian Betting Company, Bet9ja has been hacked.

Wothappen reports that the company confirmed the incident, noting that the entire Bet9ja system has been under attack by Russian Blackcat group who are famous for hacking big companies in the world.

In a statement issued by Bet9ja on Thursday, the hackers are reportedly asking for a Ransom but they never accepted their condition.

The company stated that their IT team were working tirelessly to restore normal services of the website and further assured customers that their funds are safe.

The statement reads, “It is important to keep you all updated on the actual position of things as it has been very challenging in the last 24 hours. We have seen some posts in different groups that we are carrying out a maintenance, that is obviously not the case. We will not choose an important UCL day to do such.

OTHER NEWS:  Bettors Get a Letter from the FG Regarding the Bet9ja Website Hack by Russia

“The entire Bet9ja system has been under attack by the Russian Blackcat group who are famous for several attacks to huge companies in the world. It is a huge hacker attack by this Russian group but our people are working from yesterday without stopping for a minute to restore all the services but it is not easy.”

The company told their esteemed customers to remain calm as everything will be under control.

“Please do not be discouraged, we will surely restore things as soon as possible and provide update on the progress.

OTHER NEWS:  Is it true that Bet9ja was hack by Russian Black Cat Hackers?

“They are asking for ransom already but we will never accept their conditions. it is important to let you know this so that we are all on the same page. They have hit us hard but of course they cannot kill us. We will stand our ground and come back even much more stronger,” the statement read.

Full List of 15,000 Centres Nationwide Where You Can Enrol for Your NIN as Telcos Bar 72m Unlinked SIMs