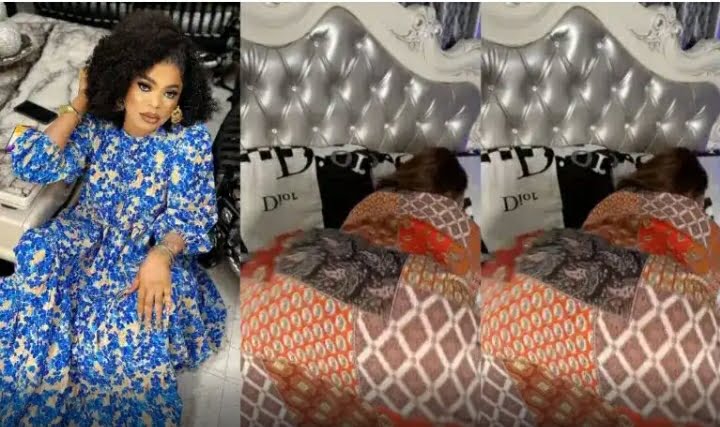 Controversial crossdresser Idris Okuneye known as Bobrisky, has stirred doubts amidst his fans as he shakes his newly acquired bum bum.

‘Mummy of Lagos’, as fondly called by his fans, rocked Instagram with his massive backside, revealing how he thanked his doctor.

He wrote: How can I say a big thanks to my doctor damn

Many who reacted to the video expressed doubt if Bobrisky was actually in the video, claiming it might be one of his tricks to fool them.

During the star-studded event held to commemorate the opening of Vicluxe Homes and Apartments, Bobrisky was captured raining money on Biodun Okeowo while undergoing a court process for accumulated unpaid debts.

In a video shared online, Bobrisky captured himself raining money on the actress with a bragging caption about how expensive his jewellery was.

She wrote: Out for my sis @officialomoborty congrat

Wothappen recalls that Bobrisky complained about his new look, which resembled a prostitute (ashawo in Yoruba).

Bobrisky furiously lamented his poor appearance on his fans’ phones, claiming he looked like someone in an accident.

He also warned them not to take his photographs with android phones as it makes him look like a retired prostitute; instead, they should use iPhone 13 to make him look good.

He wrote: “I don’t know what is in some people’s phone the moment they snap you like this you will look like someone keke jam!!!

Nobody should use any android phone to snap me, only iPhone 13 if you don’t have iPhone 13, just keep your phone in your pocket.