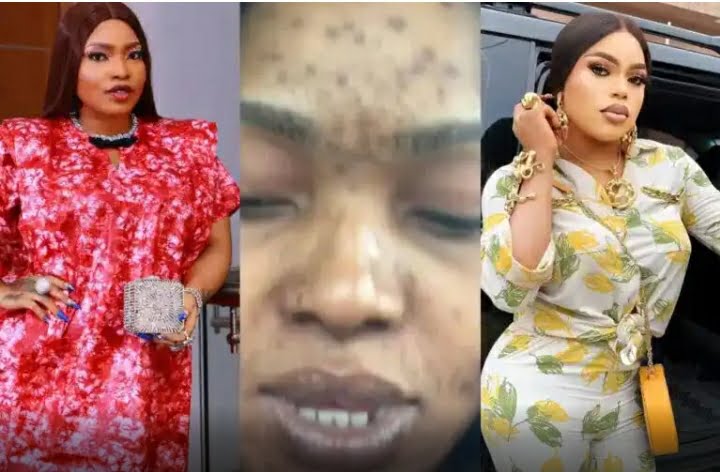 Controversial Nigerian crossdresser Idris Okuneye, popularly known as Bobrisky, has stirred the internet with a new drama as he drags Nollywood stars allegedly involved in a relationship with famous Nigerian cleric Apostle Suleiman.

Wothappen recalls that the internet was turned upside when actress Halima Abubakar confirmed a rumour shared online by a controversial blog, Gist Lover.

Halima Abubakar rocked the internet with evidence of the outcome of her relationship with the famous pastor.

Halima’s revelation led to many disagreements online as different Nollywood actresses whose names appeared on the rumoured lists of Apostle Suleiman’s side chicks made different statements to debunk the claims.

Bobrisky accused them of coveteousness, stating they knew Apostle Suleiman was married with kids and yet went ahead to date him.

The drama ‘queen’ also stated that everyone got what was coming for her.

Wothappen recalls that Bobrisky complained about his new look, which resembled a prostitute (ashawo in Yoruba).

Bobrisky furiously lamented his poor appearance on his fans’ phones, claiming he looked like someone in an accident.

He also warned them not to take his photographs with android phones as it makes him look like a retired prostitute; instead, they should use iPhone 13 to make him look good.

He wrote: “I don’t know what is in some people phone the moment they snap you like this you will look like someon keke jam!!!

Nobody should use any android phone to snap me only iPhone 13 if you don’t have iPhone 13 just keep your phone in your pocket.