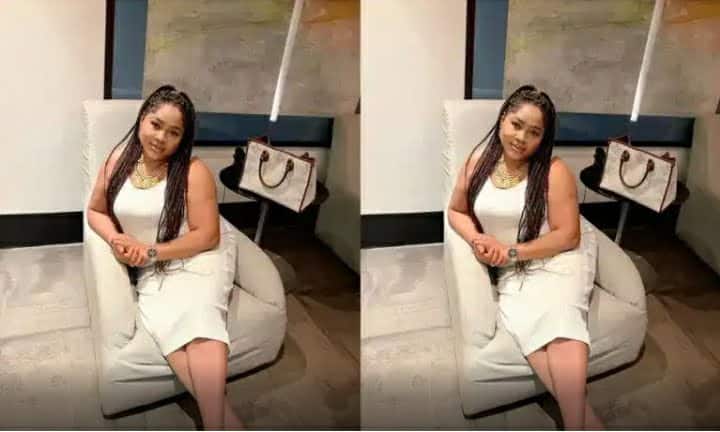 Nollywood actress Rita Daniels has sparked reactions online as she shares a beautiful photo of herself on her verified Instagram page.

The mother of two wowed her fans with her stylish photo. This is not the first time Regina Daniels’ mum will be dishing out beautiful looks.

Sharing the photo on Instagram, Rita Daniels revealed that beauty is a light in the heart, stating most beautiful people wear their hearts on their sleeves.

She wrote: The most beautiful people wear their hearts on their sleeves, and their souls in their smiles. Beauty is not in the face; beauty is a light in the heart.

Wothappen recalls that Regina Daniels showered love on her mother on social media when she took to her Instagram page to share a stunning photo of herself and her mother.

The new mother of two revealed that her mother, Rita Daniels, had always been her role model before she understood the meaning.

In reaction, Rita Daniels shared the same photo on her Instagram page, stating that she only thinks twice as a mother, one for herself and the other for her children.

Rita added that life doesn’t come with a manual but with a mother, stating that when one becomes a mother, she is never really alone in her thoughts.

“Life doesn’t come with a manual it comes with a Mother.” When you are a mother, you are never really alone in your thoughts. A mother always has to think twice, once for herself and once for her child”.

Wothappen news recalls Ned Nwoko had broken his silence on reports that he was proposing marriage to the family of comedienne, Emmanuella.

News made rounds that Ned Nwoko was in talk with Emmanuella’s family for a marriage proposal.

A journalist, Darlington Chidera Ibekwe, had reported that Nwoko had approached the family of Emmanuella for their daughter’s hands in marriage, but he was turned down.

Following the news, a fan questioned the billionaire if the rumours were true.

“Oga Ned it’s ok, I hear say you wan marry Emmanuella, is it true or false?”.

Debunking it, Ned stated that he already had many beautiful wives.

“I have beautiful wives”.