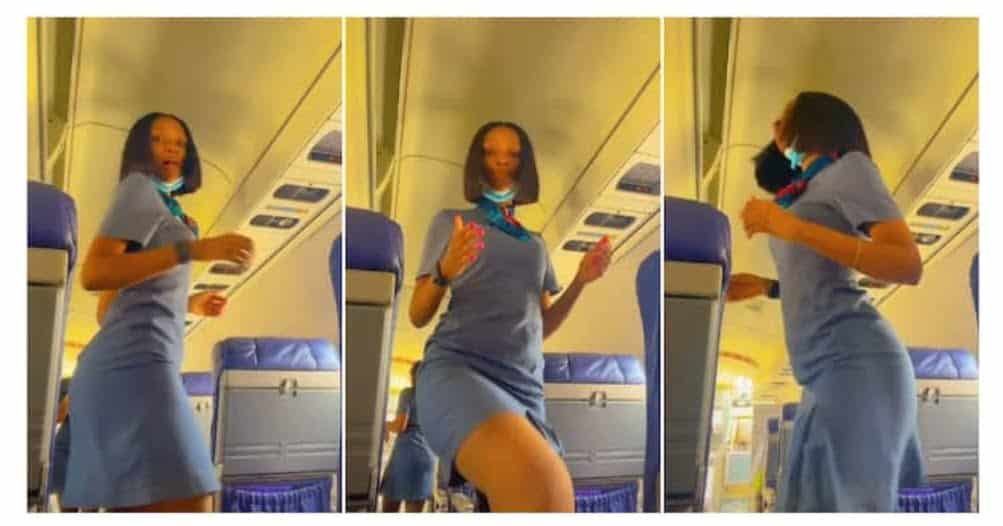 A pretty flight attendant showcased that one can still have fun at work by recording herself dancing on duty.

The lady identified as Athenia Paul, a flight attendant by profession, shared a video on TikTok in which she was dancing inside an aeroplane.

With her phone placed on a spot, she stood before it and whined her waist happily while vibing to the song Tour Du Monde by Uzu Mokonzi.

A lady walked in on her dancing but soon left without saying anything or distracting Athenia.

Athenia has amassed over 20k followers on TikTok from always sharing videos from her airline workplace, especially dance clips.

“Is the turning for me.”

“I nor go enter this plan.“

“Do you sell tomatoes . ,,, because you got my attention from my head TO-MA-TOES.”

Meanwhile, Wothappen previously reported that social media has reacted to a video of two female flight attendants dancing inside an aeroplane.

The showcase was ignited by one of the ladies identified as Athenia Paul on TikTok. The social media savvy Athenia from time to time shares videos of her activities at work and this one was one of them.

This time she teamed up with a colleague as they danced on duty.

The beautiful ladies faced each other as they shook their waists before Athenia’s colleague retreated, allowing her to continue dancing alone. In the cute video, Athenia faced the camera as she danced happily alone while her colleague turned spectator watched on.