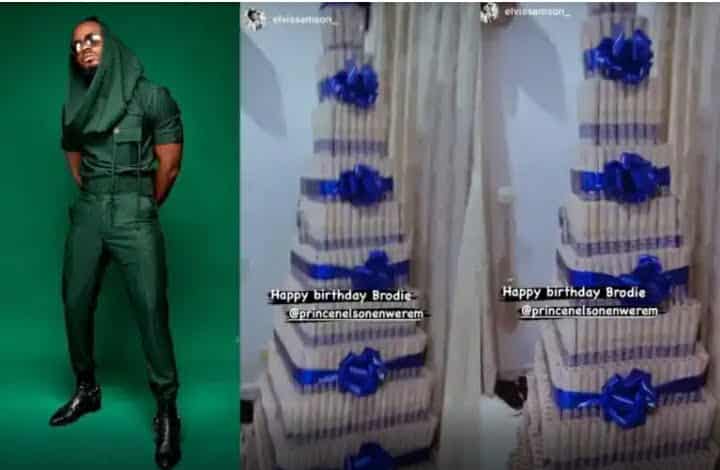 Big Brother Naija ‘Lockdown’ housemate, Prince Enwerem has proudly showed off the massive cake he received on his birthday.

Taking to his Instagram story, Prince Enwerem showed off the huge money cake he received.

Though it wasn’t stated if the cake was from his fans, but we guess it was.

Dorathy Bachor had penned a sweet birthday message to him.

Taking to her Instagram story, Dorathy Bachor dedicated three posts to him.

Describing him as a king, Dorathy Bachor hoped for him to get sense this year.

She prayed for him to have more blessings.

“A king was born”

“Try get sense this year abeg”

During the BBNaija lockdown reunion, Dorathy disclosed why she stopped being friends with him.

According to Dorathy, the reason she fell out with, Prince was because of his “insincerity”, adding that she blocked him on all messaging sites because he ‘messed up’ their friendship“

In her words; “I felt that he was manipulative and he did not have my back. He was not sincere; it felt like I was the only sincere person in the friendship. The conversation he talked about was one that was very shocking. Although we were friends in the house, I did not expect it to continue outside the house. He was with Tolani in the house even though she tried to hit on Neo.

“They had a little issue and I remember telling him not to judge her yet till they leave the house and figure it out. I expected that continuity, but I come out of the house and he was literally there for me round the clock. He was like a best friend at that time.

“I remember asking him sometimes about his relationship with TBaj but he said she does not want friendship. He does not like to talk about other people. I did not have a strong friendship with TolaniBaj, so I followed what Prince had said to me. Everything was cool until after my birthday because, after that day, I began to receive so many snide comments from Tolani.”

However, the two shocked many when they reconciled last year.