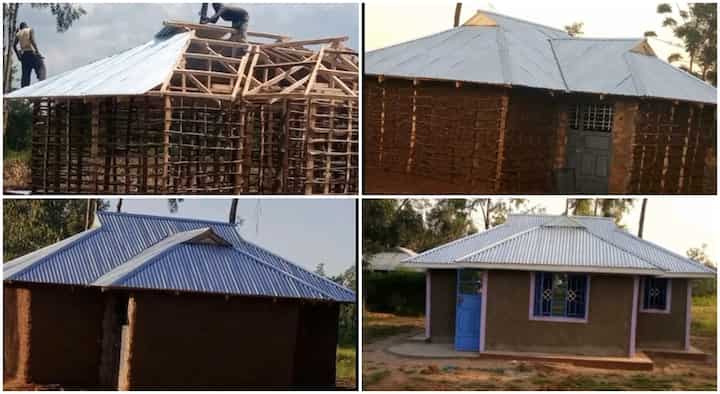 A lot of TikTokers have expressed interest in owning such a house, as the video has been viewed over 720k times

A short video showing a newly-built mud house has received over 720k views on TikTok alone.

The video was posted on the platform on October 18 by a user named Lawrance, who appears to be a building expert.

The video, which lasted about 39 seconds, showed how the house was built from the foundation to the roofing.

What made the video more interesting is that Lawrance did not use bricks for the house.

Instead of bricks, he made use of mud and sticks, which were later plastered with cement.

TikTok users who are interested in owning such a house asked how much was spent on it, and Lawrance said it cost about N1.3 million (Ksh386,000).

Lawrance said he does not use bricks because it costs less with mud.

The video of the fine house has stunned his followers on TikTok as it has been viewed over 720k times and received more than 11k likes and 251 comments.

“A total of how much? My small brother want to build.”

“But why are you not using bricks?”

“How much did you spend please.”

In a related story, WOTHAPPEN reported that a Nigerian man built a nice house for his father.

The man said in a TikTok video that he was sad that his mother was now late.

He said he would have liked the situation where his mum would be around to live in the house.

THE MOST STREAMED SONG ON SPOTIFY IN 2022 REVEALED