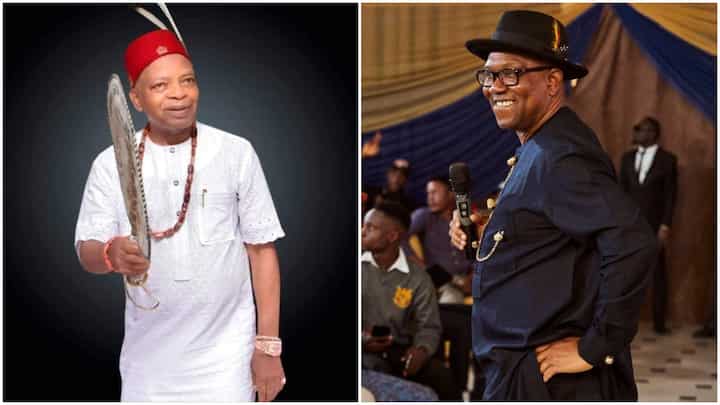 Chief Eze, a respected Igbo leader, had said he was not in support of Obi’s presidential ambition, adding that he had advised him to step down

Lagos, Nigeria – Peter Obi, the presidential candidate of the Labour Party (LP), says Chief Arthur Eze is a respected Nigerian who is entitled to his own opinions and beliefs.

Obi, according to Vanguard, said this on Wednesday, December 28, while speaking to newsmen at the Murtala Mohammed International Airport, Lagos.

WOTHAPPEN notes that the LP flagbearer was reacting to Chief Eze’s statement about his presidential ambition.

The respected Igbo leader had said he was not in support of Obi’s presidential aspiration, adding that he had earlier urged him to step down from the presidential contest.

Commenting on the development, Obi described Chief Eze as a respected father not just in Igboland but in Nigeria.

OTHER NEWS:  Kwankwaso May Accept To Be Peter Obi’s Running Mate – NNPP Spokesman

The former Anambra governor further said like every other person, Chief Eze has the right to his own opinion, beliefs and freedom of speech, which should be respected.

The LP presidential candidate also urged his supporters not to allow negative comments to dampen their spirit or force them to lose focus on the goal.

“Such speeches should always be taken positively, as reminding us that we still have several hurdles to cross and to remain focused at all times, without being dragged back,” Obi was quoted as saying.

“Even with all the insults? Obi keeps teaching us manners.”

“PO man up and tell people the truth in their faces. Arthur Eze has this intimidating character of fighting his people over little issues. He’s a beneficiary of the lopsided Nigeria corrupt system.

“He has only one vote and maybe his family members and those who feed from his pocket. Any Igbo man or woman who’s against Obi’s presidency is enemy of the Igbo race simple!”

“Obi is a class of his own. No time for his political enemies.”

“This humility is what is causing confusion in the camp of the enemies of Nigeria. This humility will take him to Aso rock.”

“I thank God for the life of Peter Obi. God bless Peter Obi for his wisdom, understanding and humility. Peter Obi is so exceptional among all other candidates.”

Earlier, WOTHAPPEN reported that the spokesperson for the LP’s presidential candidate, Diran Onifade said Chief Eze’s comment about Obi’s ambition was unfortunate but not unexpected.

Onifade said Eze through his comment was only stating his own opinion.

“It is the influence of people like that that we want to take our politics away from,” the LP spokesman said.