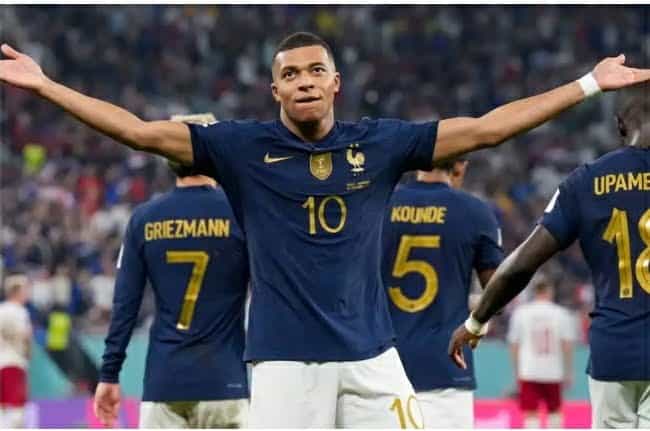 Mbappe scored either side of an Andreas Christensen header to secure the victory for Les Bleus.

The superstar striker is enjoying this World Cup, having already found the back of the net in France’s opening-game 4-1 victory over Australia earlier this week. It means he has bagged three goals at this tournament and is just one goal shy of equalling his tally from 2018.

That was the tournament when the then-teenage sensation starred as his nation lifted their second World Cup. Now aged 23, he is starting to justify why he is regarded as the best player at this year’s tournament – and many believe he can secure his second World Cup crown.

During the 2018 edition, the Paris-born striker equalled two long-standing records held by Brazilian football legend Pele. They are the only teenagers who have scored in a World Cup final – as Mbappe netted in the showpiece against Croatia – and the only teens who have bagged a brace in one game in the tournament.

In Qatar, Mbappe equalled another of Pele’s records that stood untouched for over five decades. The striker’s two strikes against Denmark took him to seven goals in the World Cup, making him the second player, after Pele, to reach that tally before his 24th birthday.

OTHER NEWS:  Europa League: Arsenal qualify for Round of 16 after Zurich win

Mbappe broke the deadlock against Denmark with a deflected effort from close range, but French joy lasted all of seven minutes before Andreas Christensen headed Denmark level. However, Mbappe came to his country’s rescue – as he so often does – with a second from close range after a superb Antoine Griezmann delivery.